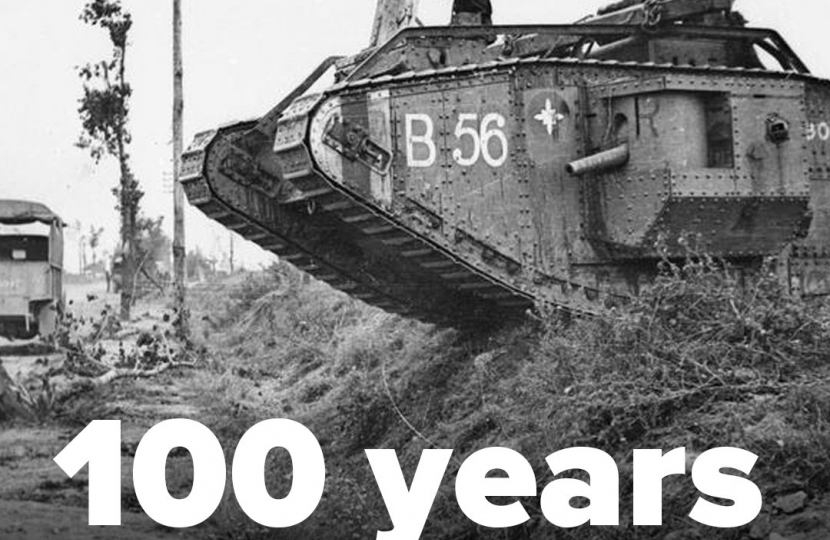 Last week marked the centenary of the Battle of Amiens, in the shadow of Passchendaele and the Somme, Amiens was a decisive turning point for the Allies in World War One. As we approach November’s Armistice Day, even the seemingly most innocuous dates will be the centenary of a day one hundred years ago when men young and old, on both sides, tragically lost their lives.

The Great War, while fought in the fields of Belgium and France, had a devastating effect on our county and its village and towns. It is almost unimaginable in this day and age that each town and village in Leicestershire would lose a native son, and yet thousands of men from our county left behind their families with a sense of duty and pride, many of whom would tragically never return home.  As we move further closer to Armistice Day on 11th November, I have been struck by the wealth of commemoration and remembrance demonstrated in our county.

In my South Leicestershire constituency, the excellent Harborough District Council have erected two metal silhouettes of a ‘Tommy’ in Broughton Astley and Lutterworth; the solider who stands head slightly bowed, with rifle in hand is a poignant and striking reminder of the horrors of the conflict and a tribute to then 52 men from Lutterworth and the 34 from Broughton Astley who made the ultimate sacrifice for the freedoms we enjoy today.

Just this morning, I was similarly pleased to see the results of Leicestershire County Council’s Green Plaque scheme, which, as I hoped, has awarded a Green Plaque to former Countesthorpe resident, Captain Robert Gee. Captain Gee had an illustrious and colourful life beginning with his being orphaned to the Countesthorpe Cottage Homes for Orphaned Children, before enlisting in the Royal Fusiliers where he saw action in Gallipoli and the Somme, where he was awarded the Military Cross, and later the prestigious Victoria Cross for single-handedly attacking a German machine gun post in November 1917. Captain Gee would also go on to become the Conservative MP for Bosworth before later immigrating to Australia.

I am delighted that Captain Gee’s extraordinary acts of valour have been recognised and rightly so, however the actions of many of those who served in World War One will not be afforded the same Green Plaque. Instead it is our duty as residents of the county to ensure that each and everyone one of the brave men from Leicestershire who served in the Great War are afforded the respect and remembrance they deserve come Armistice Day.

This article was originally printed in the Leicester Mercury on Friday 17th August, as part of the 'In the House' series.