Beavers inspire Alberto to help Save the Rhinos 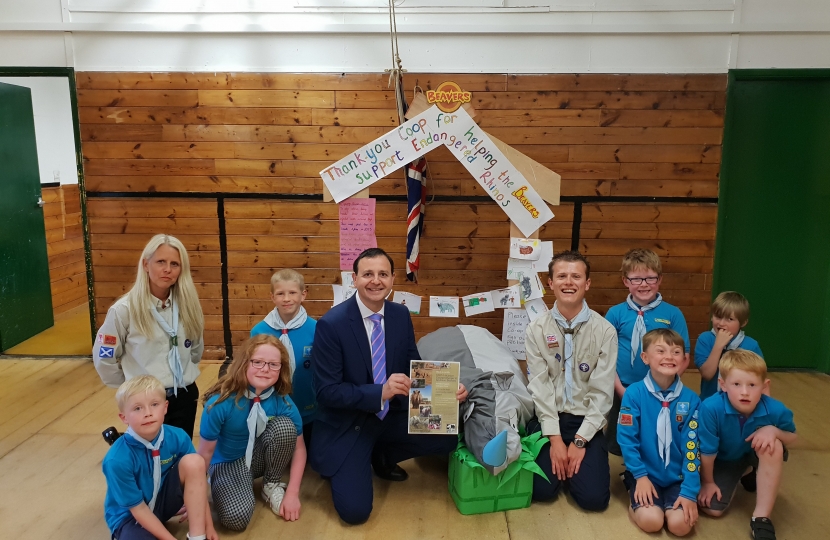 South Leicestershire MP, Alberto Costa, was pleased to visit the 109th Leicester Beavers troop based in Countesthorpe on Tuesday evening [29th May] to see the group’s work for the ‘Save the Rhino’ campaign as part of their annual Beaver Community Impact Project.

The Save the Rhino campaign picked by the local troop was launched to help raise awareness of the scarcity of these creatures in wild, especially with both the Javan and Sumatran rhino population being listed as ‘critically endangered’. The Beavers, as part of the campaign, raised funds in a variety of ways from selling flowers to doing sponsored scooter rides around Countesthorpe village.

Alberto said, “It was a real delight to visit the local 109th Leicester Beavers troop in order to see their excellent work for this very worthwhile campaign and to hear about the importance of rhino conversation. I understand that the Beavers have been doing incredible work in the local area from organising a petition to raise awareness of this issue in Countesthorpe, to building their own mascot – the brilliant Ronnie the Rhino – and the Beavers themselves implementing clever and unique ways of raising further funds; an extraordinary, innovative effort by these young volunteers”.

Jack Barber, Troop Leader for the 109th Leicester Beavers added, “109th Leicester Beavers have been working very hard over the last few months trying to help save endangered rhinos for their Community Impact Project. They have raised £300 for Save the Rhinos, told all of their friends and families, built a giant rhino, written letters, receiving a reply from 10 Downing Street and made an exciting video - coming soon! This was entirely Youth Shaped, meaning everything we did was the Beaver's own ideas, and a great opportunity for the young people to engage in community action. It was wonderful that Alberto could join us to hear about our success and help raise awareness of the Beaver's efforts”.

Alberto concluded, “I understand that this group of Beavers have been involved in a variety of projects previously, from raising funds for Countesthorpe Library, to Alzheimer’s and now the Save the Rhinos campaign. It is hugely encouraging to see such a dedicated and conscientious group of young people engaging with a wide variety of issues and also taking the time to engage with their local community. Their innovative ideas are very much driven by the troop themselves, and I should like to congratulate the group and their Troop Leader, Jack, on their truly excellent work which has been of great benefit to their community and has given these young Beavers the chance to develop important skills and the confidence to tackle such an array of important projects”.

Alberto is pictured above with members of the 109th Leicester Beavers troop.