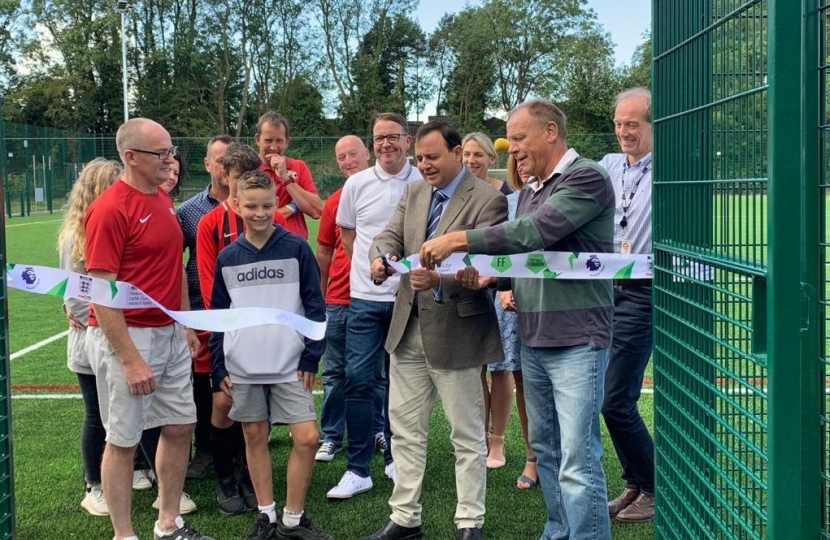 At the ceremony last Sunday (1st September), Alberto joined players, coaches and representatives from Saffron Dynamo to formally open the state-of-the-art pitch at Cambridge Road in Cosby. After securing a £373,599 grant from the Football Foundation, work on the new pitch begin in February earlier this year replacing a grass pitch to support their 15 teams across different age ranges.

The new artificial grass pitch will help the club develop an additional six teams over the new five years, leading to over 130 additional people participating in football in the local area.

Alberto said, “I was honoured to join coaches, players and parents at Saffron Dynamo FC to formally unveil their brand new, state of the art all weather football pitch on Sunday. All those associated with the club do a tremendous amount of work, and dedicate a lot of their time, to their local community in running such a fantastic club in Cosby and this new pitch will only help the club develop further for the benefit of football players and fans in Cosby and the wider community”.

Mr Paul Thorogood, Chief Executive of the Football Foundation, added, “The support of the Premier League, The FA and government enables the Football Foundation to help improve community sports facilities like this one across the country. Their funding has played a key role in delivering this new 3G AGP in Leicestershire and I am delighted for everyone associated with Saffron Dynamo FC”.

Cllr Les Phillimore, Blaby District Councillor for Cosby with South Whetstone, said, “This was a fantastic day celebrating the official opening of the brand new 3G all-weather pitch at Saffron Dynamo. Already a highly successful club, the addition of this pitch will ensure that come rain or shine, the great sporting traditions of Saffron Dynamo will go from strength to strength and demonstrating what can be achieved when volunteers, club officials and the Football Association have a joint vision to provide top class facilities. Congratulations to all those involved in developing and delivering this project”.

Alberto concluded, “I am delighted that the club’s vision for this new pitch has been realised thanks to a most generous grant from the excellent Football Foundation. I am very grateful to them, the Premier League and the FA for continuing to invest in grassroots football and widen participation in South Leicestershire. I really look forward to watching Saffron Dynamo continue to grow and develop, much to the benefit of their local community”.