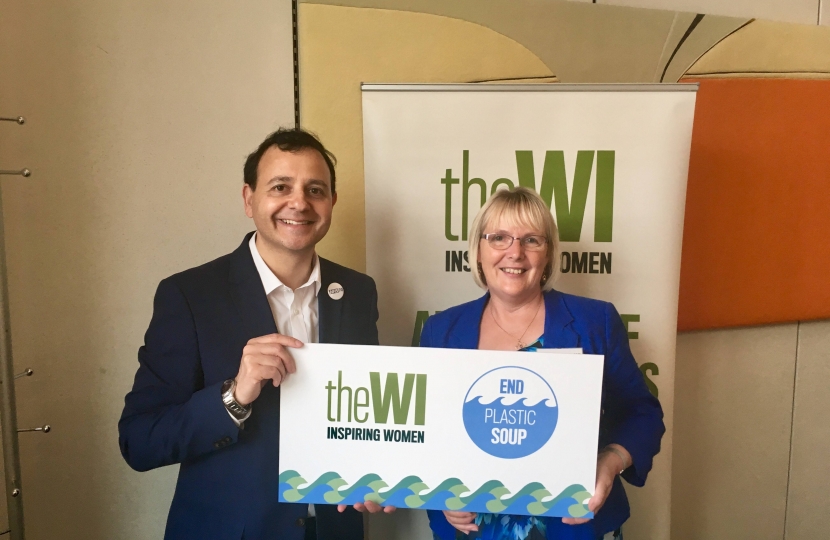 Member of Parliament for South Leicestershire Alberto Costa has given his backing to a new environmental campaign launched by the Women’s Institute (WI) to address the impact plastic micro fibres are having on the world’s oceans and marine life.

Alberto, who attended the WI’s reception in Parliament earlier this week, met with representatives to discuss the new ‘End Plastic Soup’ campaign which is asking MPs to look into the effects of plastic micro fibres that are released from synthetic clothing during the washing process which then run into the world’s oceans causing further pollution and harm to marine life.

Alberto said, “I was very pleased to see the WI in Parliament earlier this week to learn of their brilliant new campaign and to see the tremendous work they are doing to raise the profile of the dreadful impacts these micro-plastics are having on our environment. The micro-plastic fibres, most of which are less than 5mm in size, are released while clothes are being washed and are too small to be caught in a washing machine filter or the sewerage system and are causing further horrendous damage to the oceans and marine life”.

Vice-Chair of the National Federation of Women’s Institutes (NFWI), Ms Ann Jones, added, “The NFWI was delighted to see so many MPs from across the political spectrum attend our End Plastic Soup drop-in session on microplastic fibre pollution. It’s important that politicians are aware of the problem and play their part in find potential solutions. The End Plastic Soup campaign calls for in-depth research and innovative solutions to be developed from the Government and industry to stop the contamination of microplastic fibres in our oceans. Protecting the ocean is something WI members feel passionately about; the campaign passed with a 98.9% majority at the WI’s 2017 Annual Meeting and the campaign follows a long history of WI action to protect our oceans”.

Alberto concluded, “The Government and the Environment Secretary, Michael Gove, have been doing some excellent work in trying to limit our nation’s plastic pollution that is having such a hugely debilitating effect on our oceans and wildlife. I am very pleased to support the WI’s very worthwhile and laudable campaign, and I will certainly be taking this matter forward with Ministers to ensure, like micro-beads, that this kind of plastic pollution becomes a thing of the past”.

Alberto is pictured with NFWI Vice-Chair, Ms Ann Jones, at the ‘End Plastic Soup’ reception in Parliament earlier this week.