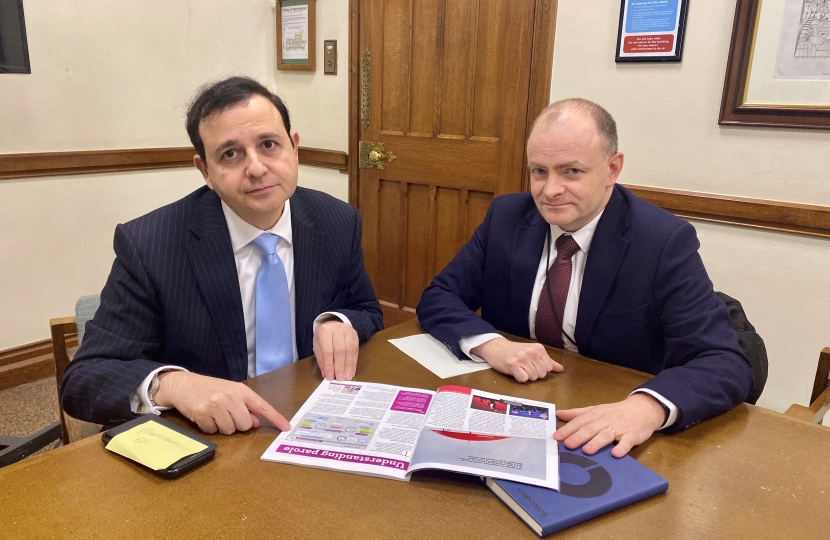 Alberto Costa, Member of Parliament for South Leicestershire, has met the Chief Executive of the Parole Board for England & Wales, Mr Martin Jones, to discuss the case of convicted child-killer Colin Pitchfork who is eligible for his next parole review.

Colin Pitchfork, who was jailed in 1988 for the rape and murder of Lynda Mann and Dawn Ashworth in 1983 and 1986, has had his case referred to the Parole Board for review. Pitchfork has been refused parole on all previous occasions including on the most recent occasion last year.

Following the meeting, Alberto has announced that he will be writing to the Secretary of State for Justice, The Rt. Hon Robert Buckland MP, to ensure that both he and the Parole Board are aware of local concerns before Pitchfork’s release is considered.

After discussions with the previous Justice Secretary, Alberto had successfully campaigned for changes to Parole rules which meant that summaries of decisions were now made available alongside a new ‘reconsideration mechanism’ that allowed members of the public to challenge Parole Board hearings.

Alberto said, “Colin Pitchfork’s heinous crimes quite understandably live long in the memory of many of my constituents, and his case is still of considerable concern to residents in South Leicestershire. In light of his recent referral for a parole review, I was very pleased to meet with the Chief Executive of the Parole Board and to gain a better understanding of Pitchfork’s case in order to inform the next steps I will be taking on this matter. The safety and wellbeing of my constituents is of course paramount importance, so I want to ensure that the Parole Board are fully aware of Pitchfork’s crimes and his character before any decisions are made”.

Alberto added, “Following this meeting with Martin, I will now be making representations to the Secretary of State for Justice in order to convey the very serious concerns of my constituents over Pitchfork’s potential release, and to clarify what license conditions he will be subject to if he is released. It goes without saying that I would like to see strict conditions implemented alongside clear exclusions zones to ensure Pitchfork is never allowed to return to Leicestershire or anywhere nearby. Given the grave offences committed I need reassurance that public safety has been properly and fully considered before any release is considered”.

Picture above shows Alberto with Mr Martin Jones, the Chief Executive of the Parole Board for England & Wales, during their meeting last week.