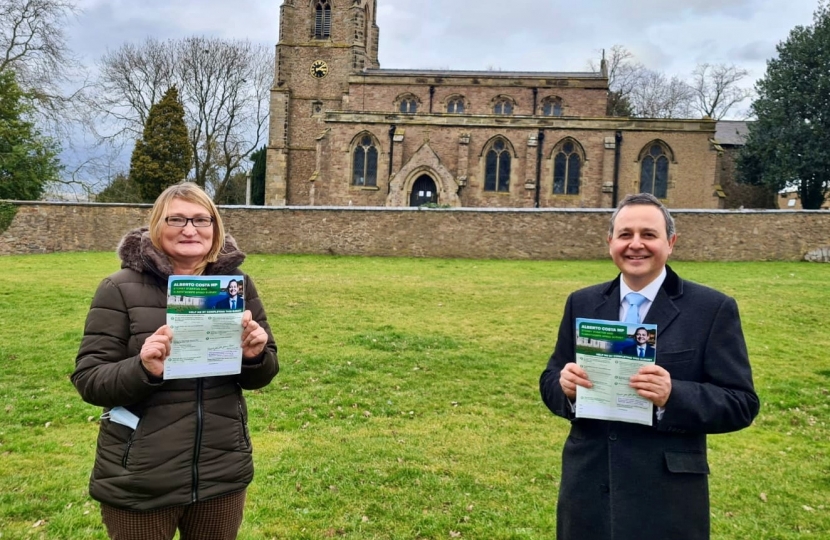 Alberto Costa, MP for South Leicestershire, has issued a survey to over 1,600 households in the villages of Stoney Stanton and Elmesthorpe in order to ask for their views on the safety of the B581, Station Road, running between the two villages.

The MP has been working closely alongside the area’s County Councillor, Maggie Wright, and local campaigner, John Taylor, who has been seeking safety improvements for the stretch of road for over ten years following a crash involving him and his wife and a fatal collision in January 2019 in which Mr Taylor’s son’s girlfriend,  Leah Ryan, was tragically killed.

Alberto's survey asks residents for their views on the safety of the B581 road, the measures they would like to see implemented – such as speed reduction or improvements to signage – and also asks residents if they believe the speed limit through the village of Elmesthorpe, which is currently 40mph, should be reduced to 30mph.

Alberto said, “I have been very pleased to work closely with Maggie and John in putting this important survey together for my constituents in Stoney Stanton and Elmesthorpe. I know this stretch of road has been a long-standing concern for local people in both villages, and I am delighted to be supporting John’s very worthwhile efforts in trying to improve the safety of the B581. John has been working tirelessly on this campaign following his own tragic personal experience, and as such, I would really encourage all constituents to please just take a few moments to complete my survey and return it accordingly to help make our communities safer”.

Leicestershire County Councillor, Maggie Wright, added, “The safety of the B581, Station Road, has long been an issue of concern for local residents, and it is very important to capture resident’s views on this issue in order to identify the main source of worry and the safety measures local people would like to see introduced. My thanks to John for all of his hard work, and to Alberto for agreeing to launch this survey and I look forward to hearing the views of residents in Elmesthorpe and Stoney Stanton”.

Alberto concluded, “Improving road safety is always a priority among constituents and I am really delighted to be launching this survey to help make this country road safer for local people. Surveys will be arriving with constituents in the two villages from Monday 1st March, and they have until 20th March to return their completed survey to my Constituency Office via the freepost service. This survey is an opportunity for local people to have their voices heard and to help shape the future of their local community, so I do hope they will take the time to complete and return their survey and I look forward to seeing the results later in March”.

Alberto is pictured above with Leicestershire County Councillor, Maggie Wright, in Stoney Stanton with copies of the ‘Stoney Stanton and Elmesthorpe Speed Survey’.