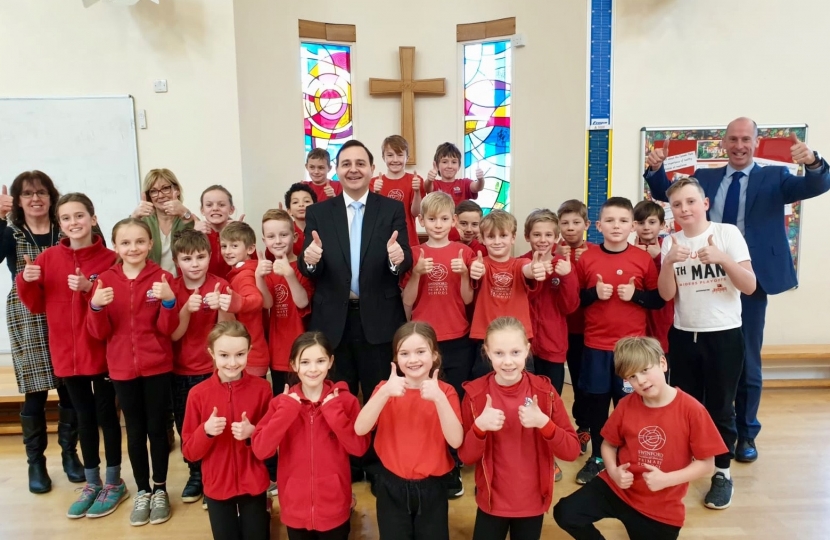 South Leicestershire MP, Alberto Costa has welcomed the decision of the new directors of the Diocese of Leicester Academies Trust (DLAT) in pausing the restructuring process at Swinford CofE Primary School.

Following the resignation of four non-executive directors from DLAT last week, the Diocese Board of Education appointed new directors who, today, have announced that the restructuring and redundancy process for the school’s Head Teacher will now be paused, until the school’s Governing Board and the wider community have been consulted.

Alberto, who has announced his intention to raise this matter with Education Secretary in the House of Commons, has welcomed DLAT’s decision.

Alberto said, “I am delighted that the new Board of Directors at DLAT have now listened to parents and carers at Swinford Primary, and have agreed to pause their restructuring process. I have always been clear with DLAT and my constituents, that this process has never been conducted in the appropriate way – for decisions of this magnitude, parents and carers, whose children will be the ones directly affected by these important decisions, must be brought into the conversation, however I am pleased that the new directors have recognised this and have now acted appropriately”.

Alberto added, “In my years in politics I have never seen such a community coalesce around a single issue in such a way before Swinford. This very welcome pause is a testament to the tremendous efforts of the ‘Save Our Head’ action group, the school’s Governing Board and the wider Swinford community who have been steadfast in their opposition to this process which has simply not been carried out in the appropriate way. Similarly, I should like to thank the Diocese Board of Education (DBE) and the Bishop of Leicester for their interventions in this matter, while this process is not at and end, the DBE and the Bishop have consistently advocated a conciliatory approach toward mediation, and their actions have been most welcome in what has been a particularly difficult and upsetting process for many involved. I very much look forward to continue working with my constituents and the new directors of DLAT in resolving this matter and in seeing that views and opinions from all corners of the community are listened to and acted upon”.

Picture above shows Alberto during a visit to Swinford Primary in February earlier this year with pupils and Head Teacher Mr Edy O’Connor.