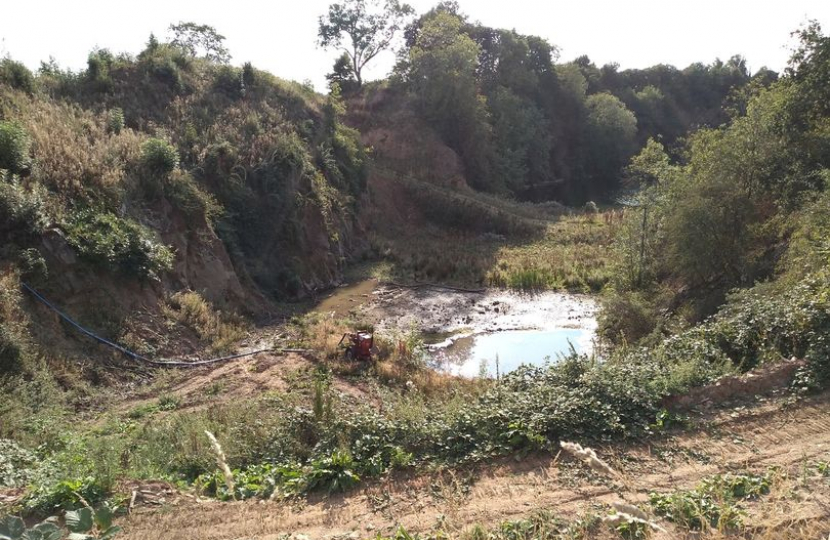 MP for South Leicestershire, Alberto Costa, has welcomed the action taken by the Environment Agency in response to concerns over activities taking place at Sapcote Quarry, with the owner of the site having now received a fine of over £15,000.

In action taken on 22nd June 2022, the Environment Agency have imposed a Variable Monetary Penalty (WMP) of £15,992 on JRM Hire and Leasing Limited, the owners of Sapcote Quarry, for illegal abstraction of water.

Since 2018, Alberto has worked closely with the Leicestershire County Councillor for Stoney Stanton and Croft, Maggie Wright, and Sapcote and Stoney Stanton Parish Councils in calling for the Environment Agency to take action following widespread concerns being raised by residents in Sapcote about the activities taking place at the site and at Granitethorpe Quarry.

Last year, the MP organised a meeting between local Councillors, representatives from the Environment Agency East Midlands and Parliamentary Under Secretary of State at the Department for the Environment, Food and Rural Affairs (DEFRA), Rebecca Pow MP.

Alberto said, “I am delighted to see that the Environment Agency have now taken decisive action against the owners of Sapcote Quarry for their illegal activities at the site. The hefty penalty imposed is a testament to all those constituents who have long held concerns about the goings-on at the quarry, and I am pleased that our collective calls for action, stretching over many years, have now been vindicated”.

Leicestershire County Councillor for Stoney Stanton and Croft, Maggie Wright, added, “I am so pleased that action has now been taken against the owners of Sapcote Quarry in the form of a fine totaling almost £16,000. I know many residents have been affected by this for such a long time, and I am sure that the people of Sapcote will be reassured that the Environment Agency have now taken firm action”.

Alberto concluded, “I would like to sincerely thank Sapcote’s excellent County Councillor, Maggie Wright, who has been working tirelessly and doggedly on behalf of local residents on this matter for several years, and both Stoney Stanton and Sapcote Parish Council for their fantastic work and assistance. I know constituents have been deeply concerned at the activities at Sapcote and Granitethorpe Quarries, and I do hope this action reassures them that the responsible authorities have been investigating and are not afraid to take action when needed”.