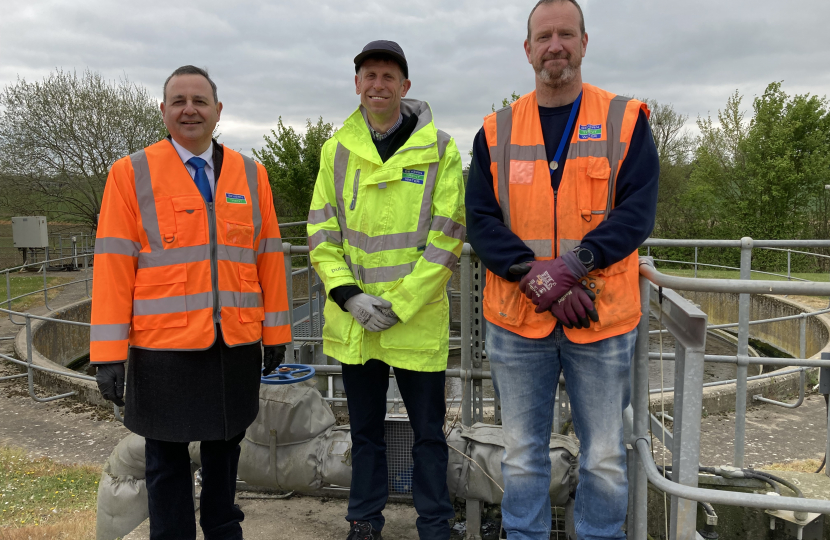 Alberto, who is Chairman of the All-Party Parliamentary Group on Microplastics, met with officials from Severn Trent water to discuss the filtering processes at treatment plants.

Alberto has been consistently raising awareness of the effects of microfibre plastics on the environment in the House of Commons. Microfibre plastic can be shed from clothing during a laundry cycle and end up in our rivers and seas by escaping from wastewater treatment works. Alberto has been campaigning for all new domestic and commercial washing machines to be fitted with microfibre catching filters.

At the visit, Alberto discussed the issue of microplastics escaping treatment works and some potential new technologies may prevent this in the future. He also discussed sewage sludge, which is the solid that is produced from treating sewage and contains organic matter. Sludge can be used as fertiliser or soil improver and as a result is often spread agricultural land. However, it has been discovered that sludge often contains chemicals and microplastics. Therefore, Alberto emphasised the importance of stopping microplastics at source.

Peter Vale from Severn Trent’s innovation team showed Alberto the work the water and waste company is doing around microplastics, and how it reuses waste removed from the treatment process.

Peter said: “We talked about the importance of source control of microplastics - and our support for the proposed Bill on preventing those microplastics coming from the washing of clothes entering the sewage network. We also had a great conversation about the innovation we were doing on extracting value from waste and the benefits of a circular economy.  We talked about the valuable energy, material and water in sewage and how we have a number of innovation projects looking at recovery of these materials.”

Peter added: “It was fantastic to talk to Alberto and his team to learn about the work they are doing to control microplastics at source and to be able share the work we are doing in harnessing the valuable energy and material in sewage for the benefit of the environment and society.”

Alberto said: “As Chairman of the All-Party Parliamentary Group on Microplastics, I was very interested to learn of the work Severn Trent does at the Lutterworth Treatment site. I was particularly interested in the harnessing of materials to create a circular economy.”

Alberto added: “Microplastics can easily escape treatment works so I was very grateful to Severn Trent for showing me their screening process. I will continue to raise awareness of the effects of microplastic pollution on our environment in Parliament and to campaign for microplastic fibre catching filters to be added to all new domestic and commercial washing machines.”