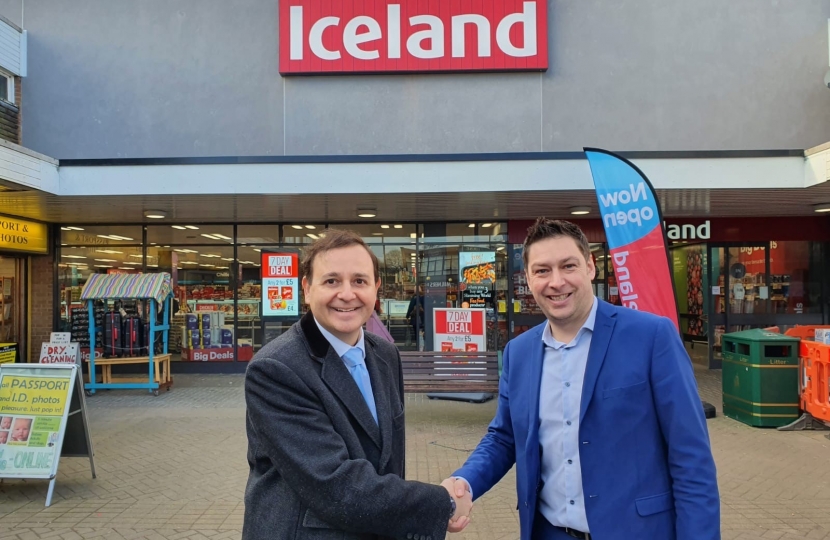 The new store, which opened on 21st January earlier this year, replaced the Waitrose Blaby branch which had previously occupied the prominent site in Blaby’s shopping precinct.

Alberto said, “It was a real privilege to visit the fantastic, newly-opened Iceland store in Blaby to meet with Darren and his brilliant team and to see the supermarket in all its glory. Iceland have made a huge investment here in Blaby, they’ve brought the previously vacant space back to life, and this is a real boost for the town both in terms of the local jobs created and in attracting shoppers, old and new, to our lovely part of the county”.

Keith Hann, Director of Corporate affairs for Iceland, added, “We have been delighted by the very positive response to the opening our new store in Blaby, which saw more than 50 customers queuing outside - some from as early as 5am - on the morning of the official opening last month. The store has met our initial expectations on sales and we are pleased with its performance, and with the many compliments we have received from local people. Our investment of over £1 million has created 15 new jobs in Blaby and we look forward to being at the heart of the community for many years to come.”

Alberto added, “I am delighted that Iceland have joined the growing family of retailers in Blaby, not only is this a real coup for shoppers, but it will also drive footfall to the brilliant independent shops which call the Town Centre home. Following the closure of the Waitrose branch last year, I know Blaby District Council have been working hard to support businesses in the town, and I would like to pay tribute to their great work over these past months and of course for helping secure Iceland’s placement as one of the flagship stores in Blaby”.

Alberto is pictured above with Darren Austin, Area Manager for Iceland, outside the new store in Blaby.