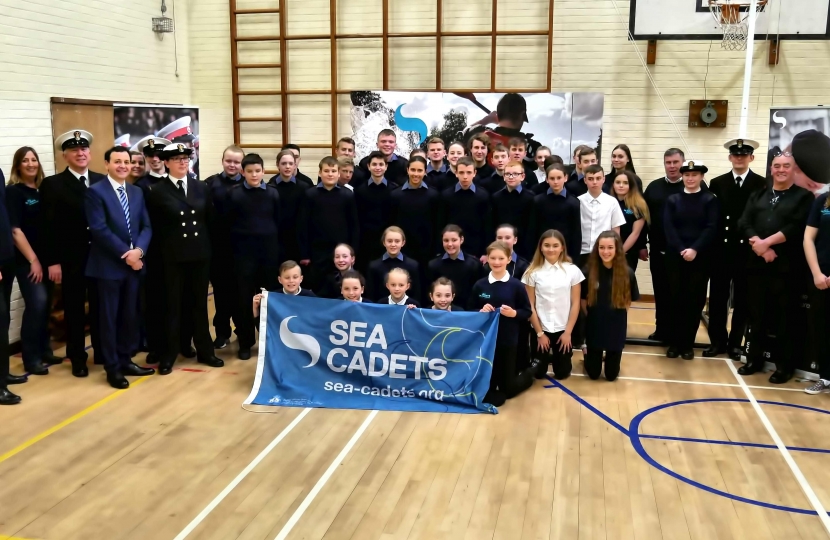 A number of cadets were promoted to Cadet First Class and Junior First Class ranks, there were also a number of individual awards given out to members of the unit who have shown exceptional effort in the last year.

The drill team were also commended for winning the district trophy and finishing sixth in the area competition. Due to the hard work and dedication of Adult Volunteers there are now more than 45 cadets that attend the unit twice a week and the excellent relationship with Thomas Estley Community College means there is room for it to grow.

Alberto said, "I was honoured to be invited to visit the Sea Cadets in Broughton Astley last week as part of their first Annual Awards Evening. This particular unit is fairly new with its beginnings in July last year, however it is quite clear the village's Cadets have been a huge success much to the benefit of the local community, but most significantly for the benefit of the young people in Broughton Astley and the surrounding area".

Thomas Estley Community College Principe, Mandi Collins, commented, “'The sea cadet unit presents a fantastic opportunity for local young people, many of whom we see growing into confident and experienced leaders within the college community as a direct result of their participation in the Sea Cadet activities as well as the jointly run Duke of Edinburgh award.”

Stephen Brown, Chair of the Broughon Astley Sea Cadets, added, "Alberto's visit to The Broughton Astley Sea Cadet's Promotions Night was very special for us. It showed to the officers and cadets that the hard work they have put in to getting the unit to an advanced position is being recognised by influential figures in our community. Alberto's presence has been a big talking point at subsequent cadet meetings and has emphasised to the cadets that they belong to an organisation that they can be proud to be a part of."

Alberto concluded, "The Sea Cadets offer a tremendous opportunity for young people to give back to their community, to make new friends, and, most importantly, to learn some excellent life skills. I would really encourage any young person in South Leicestershire or indeed elsewhere to get in touch with their local Sea Cadet unit and to get involved in their brilliant work".

Broughton Astley Sea Cadets are currently recruiting both cadets and adult volunteers, they meet on Mondays and Wednesdays from 7pm at Thomas Estley Community College on Station Road.

To find out more about joining Broughton Astley Sea Cadets as a cadet or adult volunteer please contact Stephen Brown on 07816675599 or email bascc.chair@outlook.com.