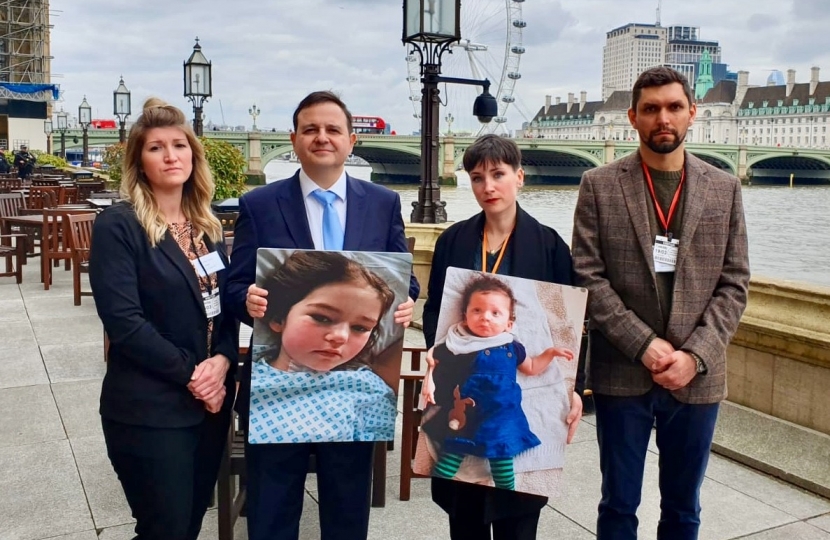 South Leicestershire MP, Alberto Costa, has supported the call from three of his constituents for the Government to reform access to medicinal cannabis for the treatment of children, at an event in Parliament earlier this week.

Alberto attend an event in the House of Commons organised by the advocacy group End of Pain which seeks to help improve access for parents and carers to medical cannabis. Mr Costa met his constituents Katie and Jonas Lukosevicius, whose daughter Evelina suffers from a rare form of severe epilepsy called CFC Syndrome, and Samantha Fairlie, whose daughter Maya also suffers from a rare form of epilepsy.

Medical cannabis was legalised last year by the Home Secretary in order for clinicians to prescribe the medicines to patients with an exception cliniclal need. The Advisory Council on the Misuse of Drugs are currently reviewing its appropriateness and will provide further advice on its usage by summer next year.

Many families, when the legalisation announcement was made, believed that this would lead to more medical clinicians prescribing the use of medical cannabis to help manage their children’s condition and improve their the quality of life. However professional bodies such as the British Neuropsychiatry Association (BNPA) have issued restrictive guidelines that have increased the barriers for clinicians to prescribe the treatment, this, along with the lengthy process of the National Institue of Excellence (NICE) looking into the matter, has also caused further delay.

Alberto said, “It was a genuine pleasure to meet Katie, Jonas and Samantha at the House of Commons earlier this week, to hear their experiences and to learn exactly what barriers my constituents are facing in seeking these medical treatments. There is strong evidence to suggest that children, such as Evelina and Maya, can have a hugely better quality of life in receiving these treatments, and so I very much support my constituent’s calls for the Government to better reform access to medical cannabis”.

Alberto concluded, “I was very pleased that my constituent’s had the opportunity to speak directly to the Health Secretary, the Rt. Hon Matt Hancock MP, to inform him of their respective cases and to explain just how important is it for children like Evelina and Maya to have proper access to this medicine. I will continue to press this matter at the highest levels of Government, to ensure my young constituents, like Evelina and Maya, and their families, have the access they need to this medicine which can make such brilliant improvements to their quality of life”.

Picture above shows Alberto with his constituents (L-R) Samantha Fairlie and Katie & Jonas Lukosevicius with pictures of their daughters Maya and Evelina.