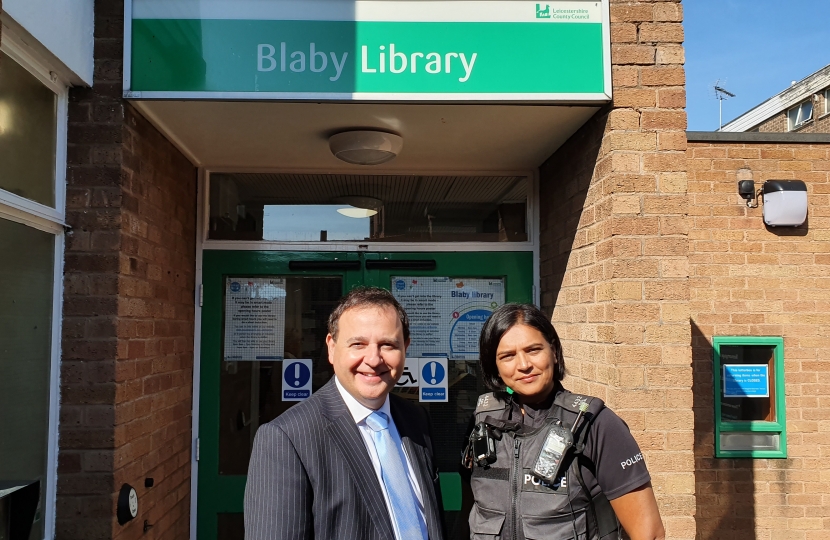 South Leicestershire MP, Alberto Costa, has received assurances from the Policing Minister, Kit Malthouse, about the Government’s actions to address knife crime in Leicestershire - Mr Costa asked a question of the Home Secretary in the House of Commons following a recent stabbing in Blaby in which one man was injured.

Following the incident, Alberto praised the quick response of Leicestershire Police and wrote to the Chief Constable to pass on his thanks to the responding officers and to be kept informed as the investigation and inquiries continued.

Responding in the House of Commons, the Policing Minister, Kit Malthouse MP, said, “Police funding is increasing by more than £1 billion this year, including…the £100 million Serious Violence Fund. This Fund includes £63.4 million for surge operational activity, £35 million to support Violence Reduction Units, and £1.6 million to help improve the quality of data on serious violence. In addition, through the Offensive Weapons Act 2019, the Government is providing the police with more powers, and making it more difficult for young people to get hold of knives in the first place. The Act includes Knife Crime Prevention Orders which will give the police an important new tool to help them to work with people to steer them away from serious violence and knife crime”.

Alberto added, “I was very pleased to receive assurances as to the Government’s robust approach to knife crime following my question to the Home Secretary in the House of Commons. The terrible incident in Blaby was a huge shock to the local community, and of course my thoughts are with the victim in question and his family. I am delighted that the Home Secretary has adopted a new, tougher approach to knife crime, giving our brilliant Police more powers to deal with those carrying knives and allowing them to be taken off the street much more easily”.

Alberto concluded, “One of the key aspects of addressing this terrible scourge is early intervention, we need to address why so many young people feel the need to carry knives, not only in cities but in our rural areas too. On this note, the Minister told me that the Government would be investing over £220 million in early intervention projects as part of the new Serious Violence Bill, it is imperative that we do as much as possible to tackle the roots causes of this issue at the very earliest opportunity. I do sincerely appreciate and understand that communities in South Leicestershire were left deeply shaken by this incident, but I do hope my constituents are reassured that the Government is doing all it can to make our communities and streets safer”.

Picture above shows Alberto with PC Uppal of the Blaby Neighbourhood Policing Team before a join constituency surgery at Blaby Library last month.