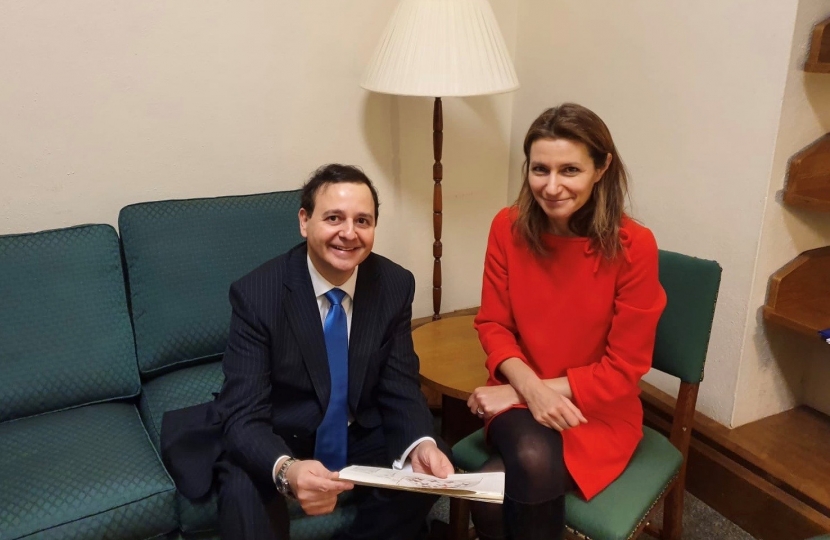 MP for South Leicestershire, Alberto Costa, has met with the Minister for Prisons, Lucy Frazer QC MP, to discuss the plans for the new HMP Glen Parva following concerns raised by nearby residents.

The plans for the new prison, which were approved by Blaby District Council in 2018, were recently changed by the Ministry of Justice with one prison block proposed to move position, prompting concerns from local residents that prisoners may be able to overlook nearby residential properties. Further worries were also raised about windows in some prison cells and buildings not being obscured.

Following his meeting with the Prisons Minister, Alberto was reassured by the Ministry of Justice’s commitment to address constituent’s concerns and has also written to the responsible planning authority, Blaby District Council.

Alberto said, “I fully appreciate the very understandable concerns of residents living nearby the new HMP Glen Parva site, and quite agree that it is most unacceptable for my constituents to have to worry about their privacy. I was however very reassured following my meeting with the Minister; Lucy and her team have listened to these concerns and have promised to act on them – the Ministry of Justice will be installing natural screening measures to ensure resident’s properties are entirely blocked out of view from prisoners in the block in question, and they have said that obfuscated windows in the cell blocks are already a condition in the approved planning application”.

Alberto added, “The concerns of my constituents are of course paramount, and I am very pleased that the Ministry of Justice have once again listened to the views of local residents and acted upon them. The new HMP Glen Parva is a huge priority for the Government and marks a £170 million investment in the local area, and with construction due to begin later this year, I will continue to press the Ministry of Justice to ensure local people and local businesses are prioritised in the construction and ongoing maintenance of the prison moving forward”.

Picture above shows Alberto with the Minister for Prisons, Lucy Frazer QC MP.

Member of Parliament for South Leicestershire, Alberto Costa, has signed a letter to the Prime Minister urging him to take immediate action to support children suffering from severe epilepsy who are being denied access to medical cannabis.