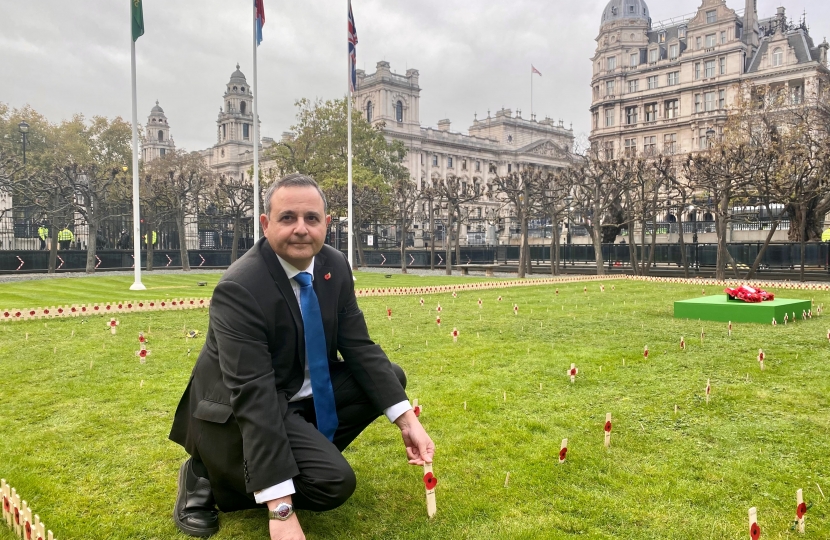 MP for South Leicestershire, Alberto Costa, has paid tribute to ‘local war hero’ Private William Buckingham VC in the Houses of Parliament by placing a commemorative stake in his honour at Parliament’s Garden of Remembrance.

Private William Buckingham was awarded the Victoria Cross by King George V, the highest and most prestigious military award for gallantry, after he rescued wounded soldiers at the Battle of Neuve-Chapelle in 1915 during the First World War – he was then killed in fighting at Thiepval, France during the Battle of the Somme in 1916.

Private Buckingham was born in Bedford in 1886, before he and his brother were placed in the Countesthorpe Cottage Homes for children when he was six years old. He then joined the Leicestershire Regiment as a 15-year-old boy in 1901.

Alberto laid a special commemorative stake with Private Buckingham’s name in the Garden of Remembrance at the Houses of Parliament. The Speaker of the House of Commons opened the temporary garden in Parliament earlier this week to mark 100 years of Remembrance.

Alberto said, “I was greatly honoured to lay a commemorative stake in Parliament’s Garden of Remembrance on behalf of the people of South Leicestershire and in memory of one of our greatest local war heroes, Private William Buckingham VC. After growing up in Countesthorpe, Private Buckingham joined the prestigious Leicestershire Regiment at just 15 years old and served with distinction before being receiving the Victoria Cross for his unbelievably brave and selfless actions at the Battle of Neuve-Chapelle.”.

Alberto added, “I am immensely proud of South Leicestershire’s close association with Private Buckingham, despite being orphaned at such a young age, he was and continues to be an inspiration for so many and it is only right that his extraordinary service to our country is remembered. The tremendous sacrifices of so many during the First and Second World Wars will never be forgotten, and I am pleased to have highlighted a fine of example of this in Private Buckingham’s life and legacy”.

Alberto is pictured above placing a commemorative stake in memory of Private William Buckingham VC at the Garden of Remembrance at the Houses of Parliament.