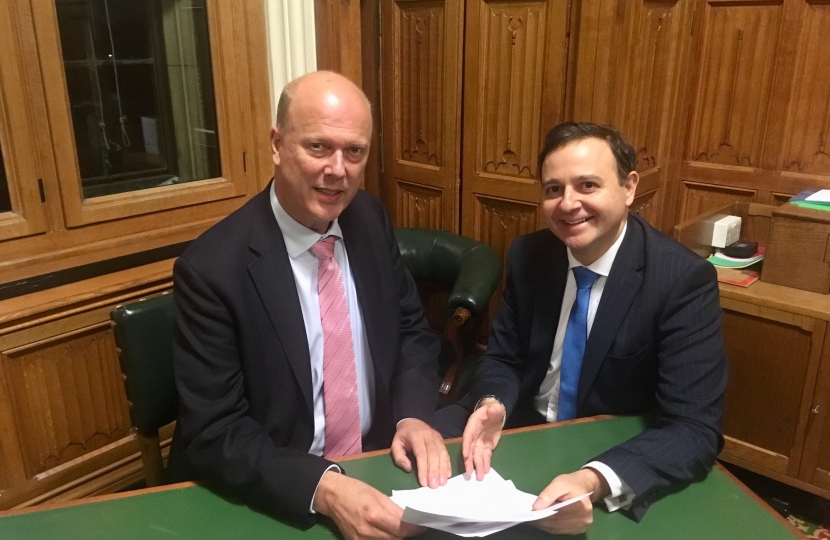 South Leicestershire MP, Alberto Costa, has met with the Secretary of State for Transport, The Rt. Hon Chris Grayling MP, in order to discuss the findings of his recent survey concerning improvements to Narborough Railway Station.

the survey, which was sent to almost 7,000 residents in Narborough and Littlethrope, asked constituents a range of questions asking for their views on how the rail services and facilities offered from Narborough station can be improved for constituents and rail users.

Alberto said, “I was very pleased to recently meet with the Secretary of State for Transport to pass on the concerns of my constituents in Narborough and Littlethorpe in order to try and get some improvements made to the station’s services and its facilities. I was delighted with the overwhelming response to the survey and I’m looking forward to working with the Minister and colleagues at the Department for Transport to get these improvements implemented as soon as possible”.

Alberto concluded, “The two most pressing improvements constituents had highlighted through the survey was the lack of passenger capacity at peak times and the lack of a ticket machine on the platform at Narborough. Both of these issues, I know are a cause of considerable frustration for constituents and passengers and so I do hope to have both of these resolved soon to ensure a smoother and more reliable service for rail users”.

Picture above shows Alberto with the Secretary of State for Transport, The Rt. Hon Chris Grayling MP.

Member of Parliament for South Leicestershire, Alberto Costa, has signed a letter to the Prime Minister urging him to take immediate action to support children suffering from severe epilepsy who are being denied access to medical cannabis.