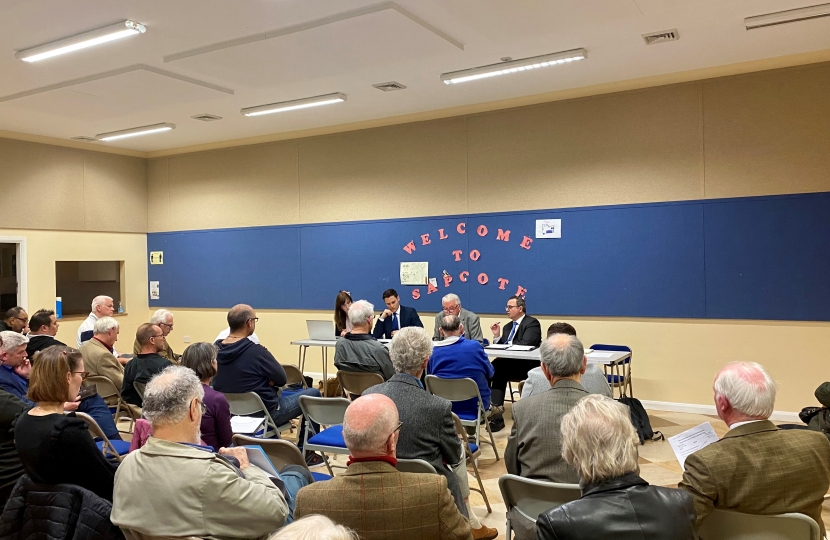 South Leicestershire MP, Alberto Costa, and Luke Evans, MP for Bosworth, met with Parish Councils from across the Fosse Villages and parts of Hinckley and Bosworth to discuss concerns about the Hinckley National Rail Freight Interchange (HNRFI) proposed for construction close to the village of Elmesthorpe.

The MPs met with the Combined Parish Councils group in Sapcote on Thursday evening (7th October) to discuss the rail freight proposals and the plans to oppose the development. Councillors from Blaby District Council, Leicestershire County Council and Hinckley and Bosworth Borough Council were also present.

Previously, Alberto has sent a survey to over 11,000 constituents in the Fosse Villages of Elmesthorpe, Stoney Stanton, Sapcote, Sharnford, Croft, Huncote, Aston Flamville, Potters Marson and Wigston Parva to ask for their views on the proposed Hinckley National Rail Freight Interchange and led a debate in Parliament on the plans in February last year.

Alberto said, “This was a very useful meeting with Parish Councils from across the Fosse Villages and other affected areas in the neighbouring constituency of Bosworth. The sheer size and scale of the rail freight proposals would have a significant impact on both South Leicestershire and Bosworth; hence I am immensely grateful to be working closely with Luke Evans, my fellow MP, in opposing these plans”.

Alberto added, “I very much the concerns of my constituents in relation to the Rail Freight Interchange; if approved, it would have a hugely significant impact on the local area in terms of the increases in traffic movements and the subsequent pressures on local infrastructure which I fear could be at real risk of being overwhelmed, and not forgetting the sizeable and detrimental environmental impact. I am pleased however that the local communities in and around the area are united in their opposition to the Hinckley National Rail Freight Interchange and I very much look forward to continue working closely with the affected Parish Councils and councillors in fighting these plans in a unified manner”.

Alberto is pictured speaking (back right) alongside Robin Wilson, Chair of Aston Flamville Parish Council (mid) and Luke Evans, MP for Bosworth (left) during the meeting with Parish Councils at Sapcote Pavilion.