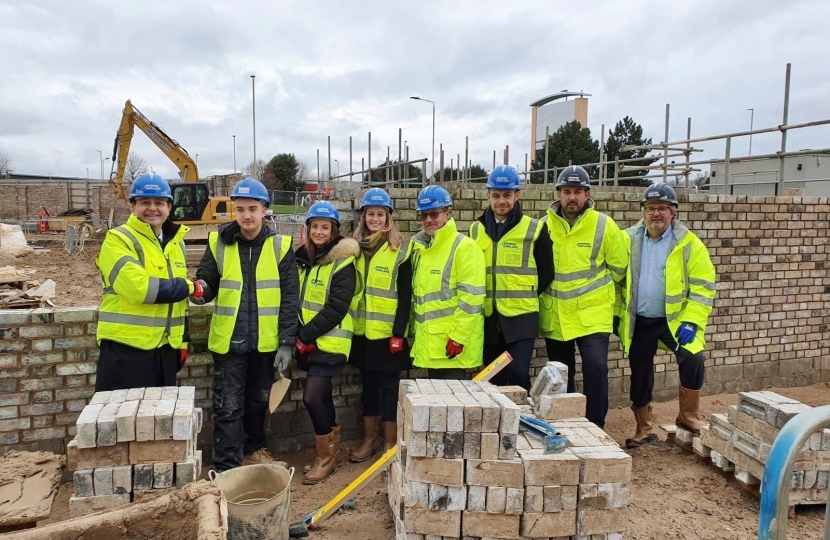 South Leicestershire MP Alberto Costa toured Fosse Park at the weekend, meeting some of the 1,000 people who have found employment through the centre’s 140,000 sq ft expansion project.

On the visit, Alberto met Louis Taylor who works as an apprentice bricklayer and who initially found employment applying through Blaby District Council’s jobs portal for work experience on the project. Louis officially started as an apprentice at Fosse Park in September 2019 and took up one of the hundreds of new construction jobs created through the development.

Alberto also met Rhiannon Bardill, who is currently employed as a site secretary for Bowmer + Kirkland, the construction company delivering the project, and who found the position through The Crown Estate’s Recruit Fosse programme.

The Recruit Fosse programme, established by The Crown Estate and delivered in partnership with the Department for Work and Pensions, connects businesses with unemployed people from the local area. To date, it has helped secure employment for over 150 local people at Fosse Park via its annual jobs fair, with the next jobs fair scheduled for spring 2020.

On the visit Alberto said, “Fosse Park has been a centrepiece of the community for 30 years, so it was great to meet some of the local people who are helping to deliver its expansion. I look forward to the extension opening its doors later this year.”

Mike Bell, Senior Asset Manager at The Crown Estate, said, “As our local MP, Alberto Costa has been a longstanding friend of Fosse Park so it was great to introduce him to Rhiannon and Louis. We’re proud of how many people we have supported into work at Fosse Park, including through our Recruit programme and we hope people can join us at our next jobs fair in the spring.”

Regional Director, Gary Bradley at Bowmer + Kirkland, said, “We built the original shopping centre at Fosse Park 30 years ago and some of our staff who worked on the scheme are still with us.  It’s great that we can support young talent like Louis and Rhiannon through apprenticeships and we’ve been absolutely delighted with their progress.”

Once completed, Fosse Park West and Food Central will include space for 13 new brands alongside a transformed food court, Food Central, which will introduce big names including Nando’s and Greggs to the centre. Upon completion later this year, the entire development will provide around 1,500 new retail and hospitality jobs for local people.

Alberto Costa, MP for South Leicestershire, has raised questions in Parliament over the protections in place to protect the planning system from abuse following local residents expressing their concern over a recently passed planning application in Claybrooke Parva.