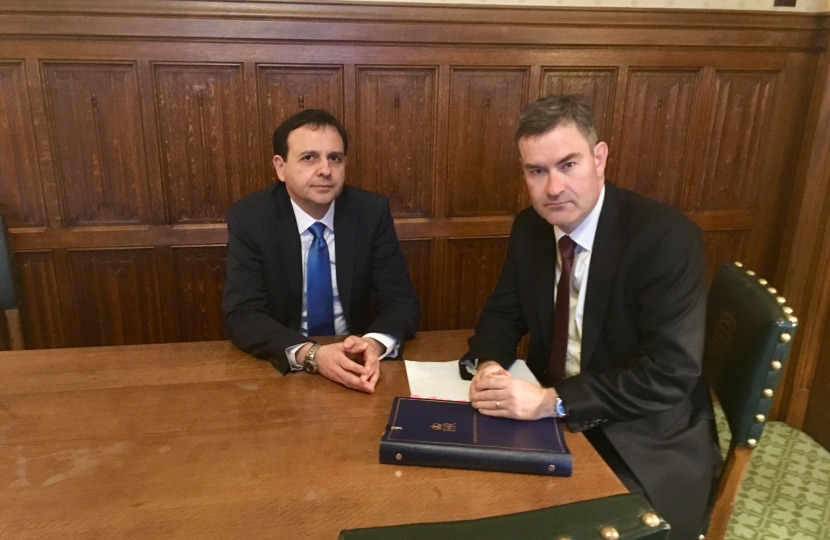 South Leicestershire MP, Alberto Costa, has met with the Secretary of State for Justice, the Rt. Hon David Gauke MP, to discuss the upcoming parole hearing for Colin Pitchfork who was convicted of brutally murdering two teenage girls in Narborough in the 1980s.

Alberto, who has previously raised this matter with both the Justice Secretary and the Prisons Minister, had asked for an urgent meeting with the Justice Secretary to discuss the implementation of new rules around the parole process following the recent announcement of Mr Pitchfork’s forthcoming parole hearing date due to take place on 24th May.

Subsequent to the recent case of John Worboys, a convicted serial sexual offender who was granted release by a Parole Board, the Government have announced plans to lift the ‘veil of secrecy’ around parole board hearings and to make available summaries of the decisions they make to victims. Mr Gauke has also committed to introducing a mechanism for people to challenge Parole Board decisions and a full review of all the Parole Board rules.

Alberto said, “In light of the recent announcement of Mr Pitchfork’s parole date next month, and of course, the recent John Worboys controversy I had urgently requested a meeting with the Justice Secretary to discuss the implementation of new guidelines in the parole process. I very much support the Government’s plans on this as I too would like to see a more open, transparent system for parole hearings that will allow my constituents and others, to be fully informed as to the decision making process”.

Alberto added, “I was pleased also to receive the Minister’s personal assurances that the Prison Service’s dossier of evidence has been fully checked and that all the necessary documentation has been included for the upcoming hearing. While, of course, the Parole Board is entirely independent of Parliament, and rightly so, it is hugely important that the Board are completely and comprehensively aware of Mr Pitchfork’s history”.

Alberto is picture above with the Justice Secretary, the Rt. Hon David Gauke MP.