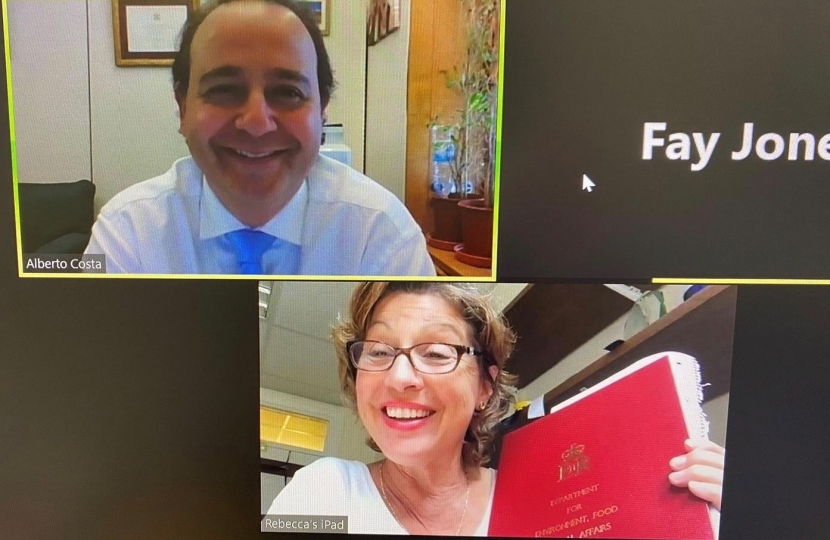 South Leicestershire MP Alberto Costa recently met with Rebecca Pow MP, Parliamentary Under Secretary of State at the Department for Environment, Food and Rural Affairs (DEFRA) to discuss plans for a new Waste Processing Plant in the village of Shawell, near Lutterworth.

The meeting follows Alberto raising the concerns of local residents in the House of Commons with the Prime Minister at the end of June.

Constituents in the village of Shawell have expressed worries about the proposals from waste management company Beauparc Group to turn Cotesbach Mechanical Biological Treatment Unit, which has been closed since 2016, into a new waste-processing centre which could process over 150,000 tonnes of waste a year.

Further concerns have also been raised about the potential increase in HGVs entering the village and the environmental impact of waste being imported to the county from places across the UK.

Alberto said, “Following my raising this matter with the Prime Minister at the end of June, I was very pleased to meet with the DEFRA Parliamentary Under Secretary of State to again reiterate the very understandable concerns of my constituents in Shawell toward these plans. This was a very useful discussion with the Environment Minister about the UK’s wider waste plans, and how appropriately placed recycling centres can fit into this from a local perspective”.

Harborough District Councillor for Misterton Ward, Jonathan Bateman, added, “My sincere thanks again to Alberto for continuing to raise the concerns of local residents at the very highest level of Government. The new waste site plans in Shawell are deeply unpopular with people in the village and in surrounding areas, many of whom would like to see greatly reduced congestion and fewer HGV movements on local roads”.

Alberto concluded, “It goes without saying that I absolutely support recycling and believe we should all do everything we can to support the environment, however it is also about finding the appropriate location to situate these sites, and I am not convinced that a lovely, rural part of South Leicestershire is one of those. My constituents in Shawell have very serious concerns about air quality and the volume of traffic entering their village, and it is hugely important that their voices are heard when the local council come to make their decision on this proposal”.

Alberto is pictured above with Rebecca Pow MP, Parliamentary Under Secretary of State at DEFRA, during their recent virtual meeting.