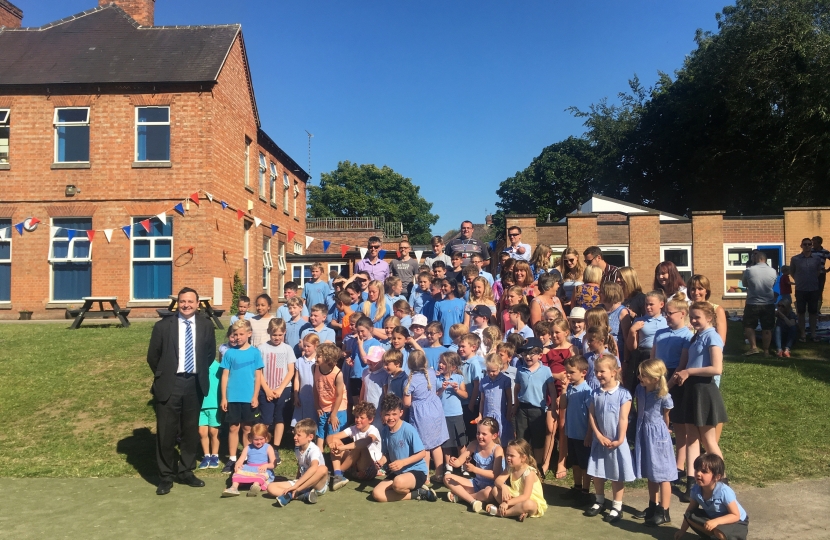 Alberto surprised Mrs Sandford at her farewell picnic last Friday afternoon to thank her for her service as Head at Gilmorton Chandler before she leaves to take up a new role as CEO of the Inspiring Primaries Academy Trust, of which Gilmorton Chandler a number of other local primary schools are members.

Alberto also presented Mrs Sandford with a signed letter of thanks from Secretary of State for Education, the Rt. Hon Damian Hinds MP.

Alberto said, ‘It was a huge pleasure to attend Mrs Sandford’s farewell picnic on Friday afternoon – it was brilliant to be see so many current and former pupils, as well as parents and members of the community, who have seen the fantastic, positive impact she has had on the community in Gilmorton”.

Mr Andrew Shields, Head of School, at Gilmorton Chandler added, “After almost fifteen years Marie Sandford is set to take her leave from a post, a school, a community she has grown to love and care for deeply. Gilmorton Chandler CofE Primary School was her first opportunity to be a Head Teacher and it is a role she has thrived in. We wish her every success in this new post and are sure that, just like she did in Headship for us, she will lead the MAT by example and help to bring about continued successes for all of our children”.

Alberto concluded, “Marie has been Head at Gilmorton Chandler for a remarkable amount of time, however her extraordinary impact on her pupils, staff and the community in Gilmorton is immeasurable. She’s made the school one of the very best in the county, and I am immensely grateful to her for her brilliant efforts. I was of course delighted to present her with a letter of sincere thanks from the Secretary of State for Education, a small, but well-deserved recognition of her time at Gilmorton Chandler”.

Picture above shows Alberto with pupils and teachers from Gilmorton Chandler at the farewell picnic on Friday afternoon.