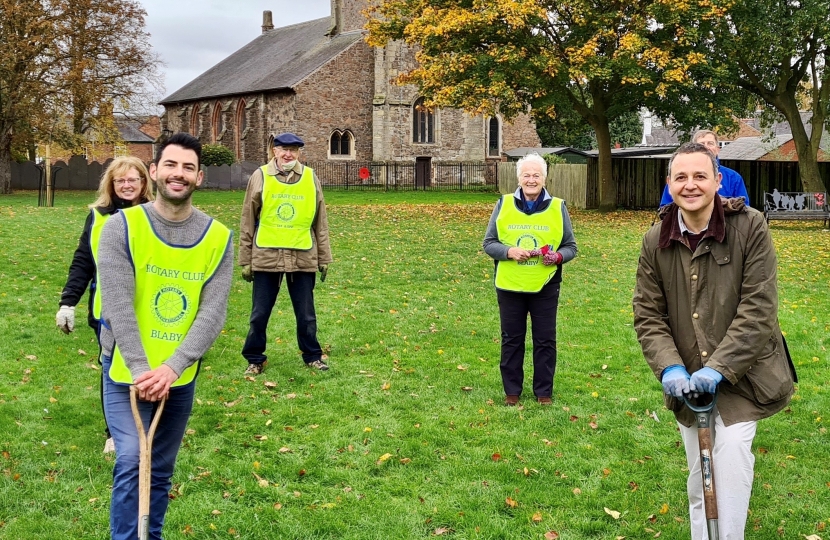 For over 30 years, Rotary of Great Britain and Ireland have been at the forefront of the End Polio Now campaign and have planted Purple Crocus flowers across the country this autumn, ahead of their blooming in spring next year, to raise awareness of the Rotary fight for a polio free world.

Launched in 1988, it is estimated that Rotary International’s Polio vaccination programmes have saved the lives of 1.5 million people and prevented 19 million people from becoming paralysed due to the disease.

Alberto said, “It was a great pleasure to join members of the brilliant Blaby Rotary Club in planting Crocus Corms around Countesthorpe in aid of their fantastic campaign committed to ending Polio around the world. The team at Blaby Rotary have been hugely active and have been making a real difference to our local communities in South Leicestershire and are doing crucially important work to raise awareness of their campaign in battling Polio”.

Blaby District Councillor and Blaby Rotary Member, Louise Richardson, added, “Rotary International are working towards the eradication of Polio worldwide and are very close to achieving this with Africa becoming the latest area to become polio free.  Rotary International are supported in this endeavour by the Bill Gates Foundation.  We will be planting in other community areas around the district over the next few weeks.  We thank Alberto Costa, MP, and Terry Richardson, Leader of Blaby District Council, for coming along to support and assist with the planting”.

Alberto concluded, “While we are very lucky in the UK to see that Polio has largely been eradicated, there are still a handful of cases around the world that require our attention and early intervention, and I am delighted that Rotary International have been leading the global fight against this terrible disease. It is important we continue to raise awareness of Polio and of course do all we can to get a vaccine to those who need it, and I would like to sincerely thank both the Blaby Rotary Club and Rotary International for all of their tremendous work”.

Alberto is pictured above with volunteers from the Blaby Rotary Club at the Centenary Paddock in Countesthorpe.