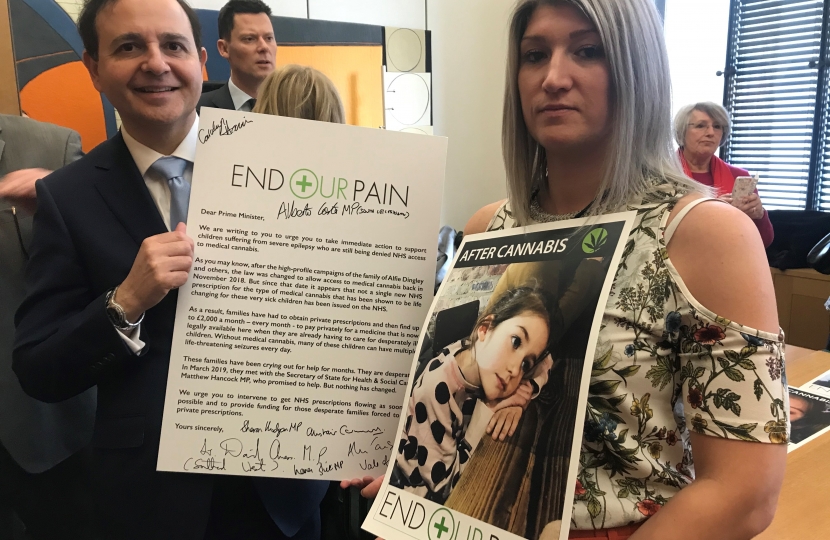 Member of Parliament for South Leicestershire, Alberto Costa, has signed a letter to the Prime Minister urging him to take immediate action to support children suffering from severe epilepsy who are being denied access to medical cannabis. The law was changed to allow access to medical cannabis in November 2018. This only allows specialist doctors to prescribe it on a case by case basis. However, since the law change not a single prescription has been issued.

Alberto signed a letter to the Prime Minister at a drop-in event in the House of Commons which was run by a medical cannabis advocacy group, End Our Pain. At the event, Alberto met with his constituent, Samantha Fairlie, whose daughter Maya suffers from severe epilepsy. Alberto has also previously met with other constituents Katie and Jonas Lukosevicius, whose daughter Evelina suffers from a rare form of severe epilepsy called CFC Syndrome.

Alberto said “It is very disappointing to hear that although medical cannabis became legal in 2018 in specialist cases, prescriptions are not being issued to help these very sick children and their families. I am calling on the Government to help to resolve this issue by urging medical bodies to recommend that medical cannabis is prescribed more freely on the NHS to help these children and their families.”

As a result of medical cannabis still not being accessible to these children, their families are having to pay for private prescriptions which cost up to £2,000 a month. Unfortunately, the decision comes from the National Institute of Clinical Excellence (NICE), who are the body in the UK responsible for what drugs are affordable on the NHS. It was decided that Medical Cannabis would not be as accessible based on value for money grounds. However, it could be argued that without access to medical cannabis, the care that these children require is more costly.

Alberto added “I was shocked to find out how much these families are paying for private prescriptions. This should not be happening, and I will be writing to the Secretary of State for Health and Social Care to highlight this as an issue. I would urge the Government and the Prime Minister to support these children and their families by improving access to Medical Cannabis.”

Alberto alongside his constituent Samantha Fairlie at the End Our Pain parliamentary drop-in.