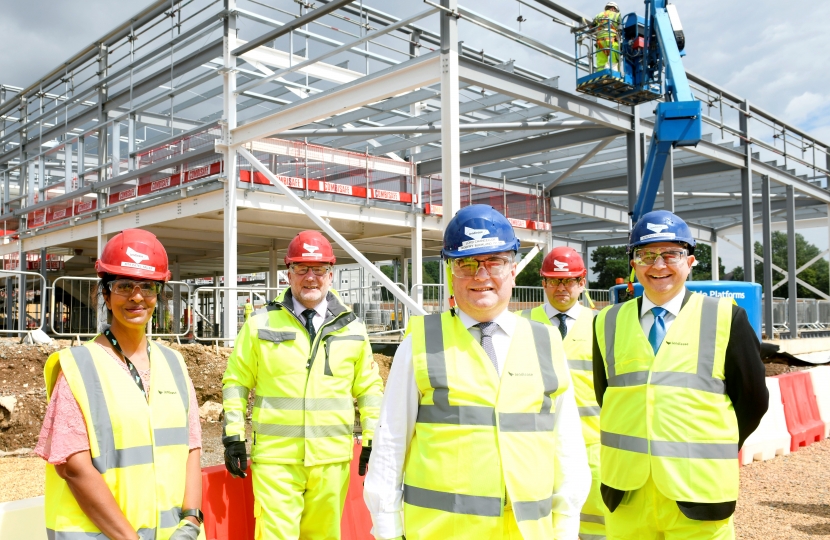 The new Category C Resettlement Prison will house 1,700 prisoners and is being built on the site of the former HMP/YOI Glen Parva with the facility likely to open in spring 2023.

Work began on the site in September last year, and Mr Costa visited with the Justice Secretary and met developers Lendlease who won the Government contract to build the new state of the art prison.

The new prison is part of the Government’s Prison Building Programme to create 18,000 additional prison places with over 100 employees on site and thousands of jobs being supported in the construction industry – the new facility will also employ 600 people when open in 2023.

Alberto said, “I was delighted to join the Justice Secretary in visiting the new state of the art prison in Glen Parva and to see the construction work progressing so quickly. This is a very welcome £286 million Government investment in South Leicestershire which has already helped create hundreds of new jobs for local people, as well as investing £30 million into the local economy, providing a real boost for businesses here in Leicestershire”.

Steve Fennell, Project Director for Lendlease, added, “We were very pleased to welcome the Lord Chancellor, Robert Buckland QC MP, and Alberto Costa MP to Glen Parva; where we’re proud to be creating jobs and providing skills and training for local people, and have been throughout the Covid-19 pandemic.”

Alberto concluded, “The developers of the new prison, Lendlease, have been doing some excellent work in providing over 1,200 work placement days for young people, creating hundreds of new apprenticeships and they have also provided an avenue for ex-prisoners to get back into work through working on the site. I am really pleased that Lendlease and the Ministry of Justice are committed to ensuring that the new prison provides benefits to the South Leicestershire community, and there will also be an opportunity for local people to get involved in the naming of the new prison very soon”.