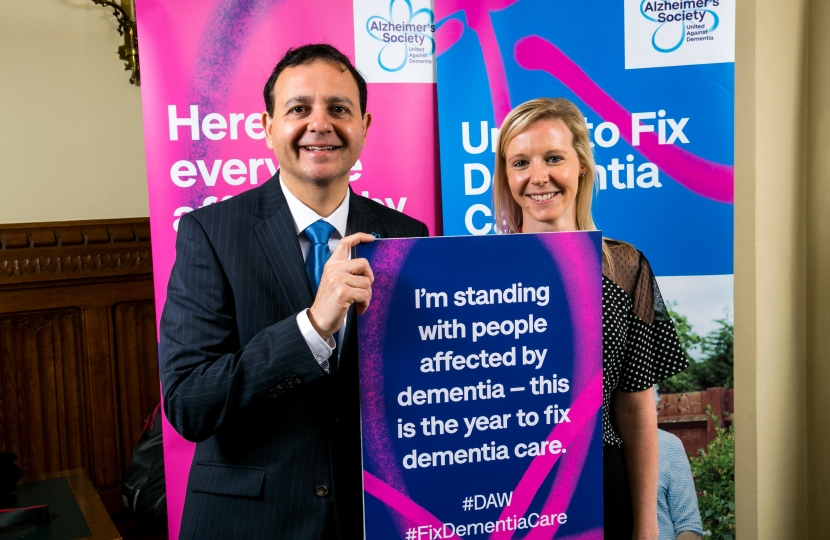 On Wednesday 23rd May, South Leicestershire MP Alberto Costa joined over 90 other Members of Parliament at an Alzheimer’s Society event to launch their new report, Dementia – the true cost as part of their Fix Dementia Care campaign.

This Dementia Action Week (21-27 May) Alzheimer’s Society is asking the general public to take small actions that can have a big impact on the lives of people with dementia. MPs were asked to take action by attending an event in Westminster to learn more about how they can support Alzheimer’s Society’s work to fix dementia care.

With no drugs to cure or slow down dementia, it’s social care not the NHS that people with dementia rely on every day. In the UK, three fifths of people using homecare and 70% of people in care homes live with dementia. Dementia is among the most complex conditions that the social care system has to support, yet too many people with the condition are struggling to access good quality care at a fair price.

Alzheimer’s Society has been campaigning to fix dementia care to ensure that everyone with dementia receives good quality care when they need it. Their new report, Dementia – the true cost, highlights the far-reaching impact of the broken social care system on people with dementia.

The report, based on testimony and evidence from people affected by dementia, social care professionals and dementia lead nurses, also outlines urgent areas for Government to address in its upcoming Green Paper on social care reform.

Alberto commented, "I am proud this Dementia Action Week to have united with people with dementia to fix dementia care. One million people will have dementia by 2021 and it is vital that we are able to deliver high quality social care to everyone that needs it, and at a fair price.’

Sally Copley, Director of Policy and Campaigns at Alzheimer’s Society said, "It is fantastic to see MPs from across parliament uniting with us to champion the voices of people with dementia, and call for reform of our social care system. This Dementia Action Week, as we’re asking everyone across the UK to take actions big or small to help people with dementia, it’s brilliant to see positive action from people and we’re looking forward to working with Alberto Costa  MP to respond to the public demand for change. Our Fix Dementia Care campaign has exposed the poor quality care that people with dementia are currently receiving, and this must end now.”

Dementia is the biggest health and social challenge we face. With one person diagnosed with dementia every three minutes in the UK, almost everyone knows someone affected but too many people face the condition alone, without adequate support. While much progress has been made to becoming a dementia friendly UK, including 2.4 million Alzheimer’s Society Dementia Friends trained globally and over 350 dementia friendly communities across the UK, people with dementia tell us that more urgently needs to be done.

People affected by dementia highlighted the small actions that would have a big impact on their lives and enabling them to live the lives they choose, such as continuing to invite people with dementia out and making sure you listen and include them in conversations.

Alzheimer’s Society is here for anyone affected by dementia. For information and support, call the National Dementia Helpline on 0300 222 1122 or visit alzheimers.org.uk.