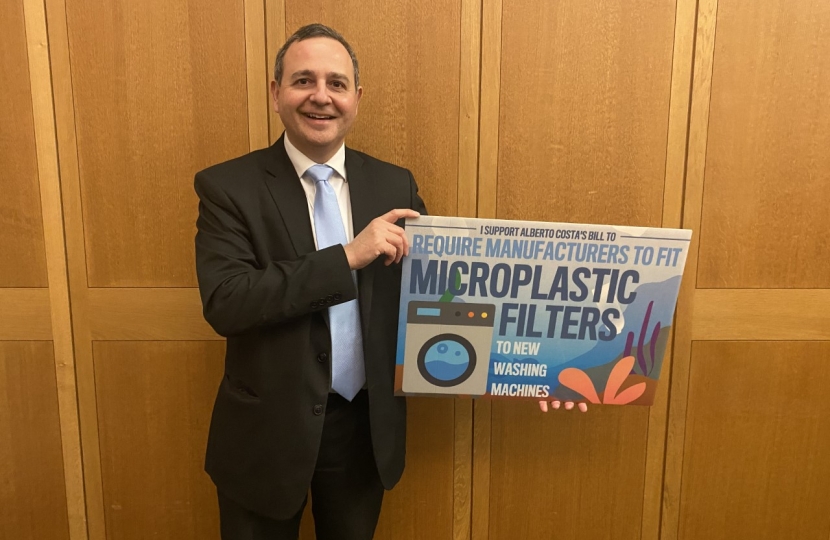 South Leicestershire MP, Alberto Costa, is introducing a Bill which aims to stem the tide of microplastic pollution. Alberto is introducing the Microplastic Filters (Washing Machines) Bill on Tuesday in the House of Commons. The Bill would require washing machine manufacturers to fit microplastic-catching filters in all new domestic and commercial washing machines. The Bill also aims to raise awareness of the polluting effects of microplastics on our rivers and seas.

Alberto, who is Chairman of the All-Party Parliamentary Group on Microplastics, is introducing the Ten-Minute Rule Bill to encourage the Government to work with washing machine manufacturers to fit filters in all new domestic and commercial machines.

The technology for this solution is already available. The company Grundig, who are part of Beko Plc, have recently released a new machine with a microfibre-catching filter. The in-machine filter catches 90% of synthetic fibres from the wash cycle.

Alberto is encouraging the Government to work with other manufacturers to produce standards for a mandatory filter in all new machines which would dramatically reduce the amount of microplastics in our environment.

Alberto has been working with the National Federation of Women’s Institutes who are the APPG on Microplastics Secretariat. The WI have been working on the campaign ‘End Plastic Soup’ which aims to raise awareness of the effects of the release of microfibres from laundry since 2017.

Alberto said: “I am delighted to be bringing in this Bill which aims to raise awareness of the damaging effects microplastics have on our environment. I am very grateful for all the support I have received for the Bill from colleagues from across the House of Commons. Microfibres are a huge problem that the Government need to tackle. With the technology already available for this solution, I am urging the Government to implement this change quickly.”

Ann Jones, Chair of the National Federation of Women’s Institutes said: “The WI has been campaigning against ocean pollution since 1927 and most recently through our End Plastic Soup campaign in 2017. As the Secretariat to the All-Party Parliamentary Group on Microplastics, we are proud to support Alberto Costa MP’s Ten Minute Rule Bill. The Bill would deliver the six holistic recommendations to clean up microplastic fibre pollution as proposed in the All Party Parliamentary Group on Microplastics first report. WI members across England, Wales and the Islands have organised plenty of community events to raise awareness of microplastic fibre pollution on the environment and so we are also pleased to see this contained in Alberto’s Bill.”

Alberto added: “This is an opportunity for the UK to become world leading in tackling the effects of microplastics. Businesses and consumers also have a responsibility and more awareness needs to be raised in this area, so I do look forward to continuing to raise this matter in Parliament in the hope that real change can be achieved soon.”