Alberto hosts event on Textiles and the Envrionment 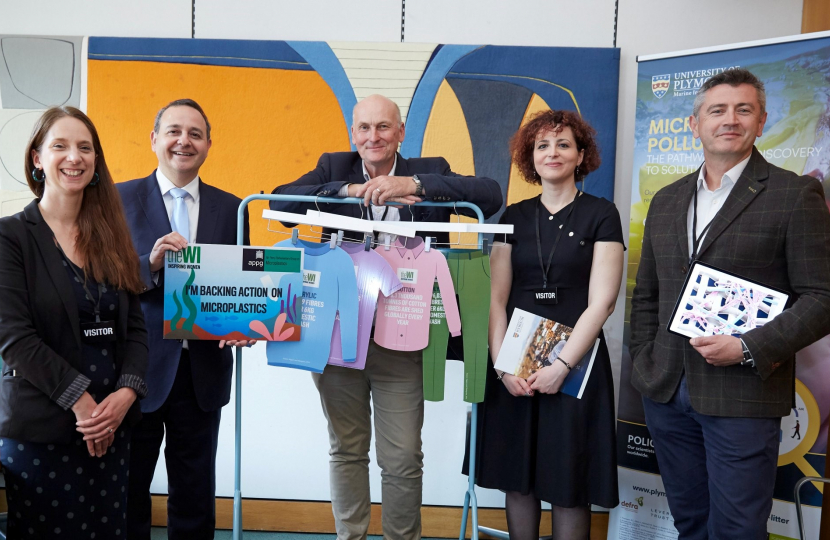 South Leicestershire MP, Alberto Costa, recently hosted an event as Chair of the All-Party Parliamentary Group on Microplastics in Parliament alongside the National Federation of Women’s Institutes on Textiles and the Environment. The event was to raise awareness among Parliamentarians of the effect textile shedding has on our environment.

The event was also attended by the University of Plymouth who discussed with Parliamentarians their ongoing research in this area and Xeros Technology Group, who have designed an in washing machine filter solution. Their filter captures over 90% of microfibre plastics from the laundry cycle.

All textiles shed microfibres, which are fibres that are 5mm in size or smaller, when they are either worn or laundered. All garments shed fibres, whether they are made from natural or synthetic fibres. Microplastic fibres are persistent and avoidable pollutants, which are currently entering unabated into human food chains, and have been discovered in human lungs and blood. Over a third of all microplastic in our rivers and oceans are released from our clothing.

At the event, Parliamentarians discussed ways to reduce fibre shedding into the environment. In the short term, best practice clothing care behaviours will help to reduce household microfibre release.

In the long term, work needs to be done across the textile construction and chemical finishing of a garment to ensure that all materials, fibres, the fabric and yarn structure and garment finishing processes are optimised to reduce as much as possible the volume of microfibres shed from garments.

Alberto has consistently championed the issue of microfibre plastic pollution in the House of Commons and has previously tabled a Microplastic Filters (Washing Machines) Bill which encouraged discussions with the Department for Environment, Food and Rural Affairs.

Alberto said: “I was very pleased to host the drop-in for Parliamentarians alongside the APPG on Microplastics wonderful Secretariat, The National Federation of Women’s Institutes, to raise awareness of the effects of textiles shedding on the environment. I will continue to raise this important issue with colleagues in Government and I hope a solution such as adding microfibre filters in all new domestic and commercial washing machines is enacted soon.”

Professor Richard Thompson, Director of the Marine Institute at The University of Plymouth said: “Our team at the University of Plymouth have been researching microfibre pollution for over 20 years.  This work has shown accumulation on shorelines worldwide, as well as in the deep sea, arctic and in commercially important fish stocks. We have demonstrated the factors leading to microfibre generation via laundering as well as wearing of garments. We have also worked to evidence the potential solutions. This event provided a fantastic opportunity to show case the evidence directly to members of Parliament. The level of interest and enquiry was excellent.”

Christian Cullinane, Managing Director of Consumer Brands at Xeros Technology Group said: "We at Xeros are proud to partner with the APPG on this serious issue of microplastic pollution and applaud the commitment and campaign work to mandate washing machine filtration legislation to stem the tide of this pervasive source of pollution.”