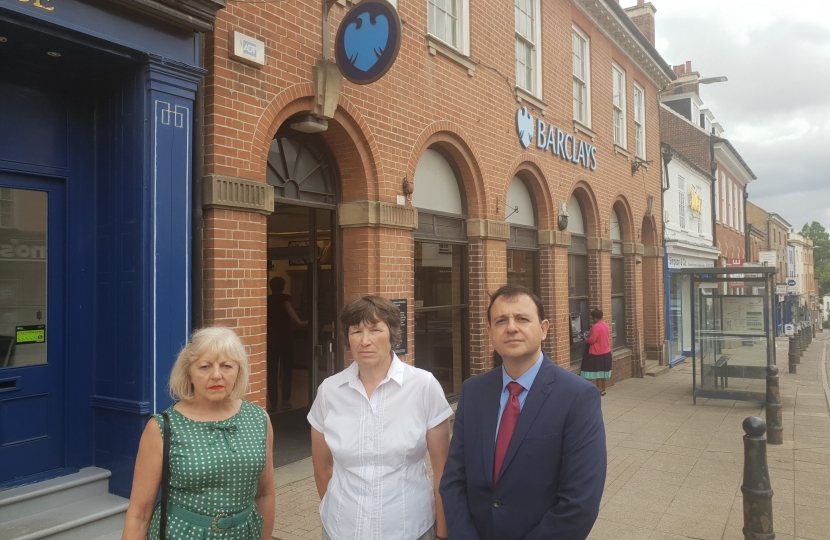 Member of Parliament for South Leicestershire, Alberto Costa, has expressed his disappointment at the announcement from Barclays bank to close their Lutterworth branch on 14th December and has written to the bank’s CEO asking for them to reconsider their decision.

Alberto, who visited the branch earlier this year to meet with staff and to discuss the bank’s community outreach activity, was recently informed of Barclays’ intentions to close their Lutterworth branch in December citing the decline in footfall and the number of customer’s using the bank’s ‘in-branch’ services.

Alberto said, “I was deeply disappointed to hear that the Lutterworth Barclays branch will be closing on 14th December, especially as this comes so soon after the proposed November closure of their Enderby branch, also located in my constituency. Undoubtedly this will be incredibly disappointing news to my constituents in Lutterworth who I know use the branch quite frequently and rely on many of the crucial services it provides”.

Harborough District Councillor for Lutterworth, Cllr Janette Ackerley added, “It is of course very said to hear that a service for our residents is disappearing, however I very much welcome the intervention of our MP to see what replacement services can be gained for residents and customers in Lutterworth”.

Alberto concluded, “Unfortunately, the decline in footfall in our high street banks does appear to be something of a growing trend, however it is important that banks are available for those, such as the elderly, who many not use internet banking and might prefer a more personal, in-person service. I will be writing to Barclays to ask for a full explanation behind this closure, and more importantly, to ask what mechanisms they will put in place to cater for the branch’s existing customers”.

Picture above shows Alberto alongside Harborough District Councillors for Lutterworth Cllr Geraldine Robinson and Cllr Janette Ackerley outside the Barclays branch in Lutterworth.