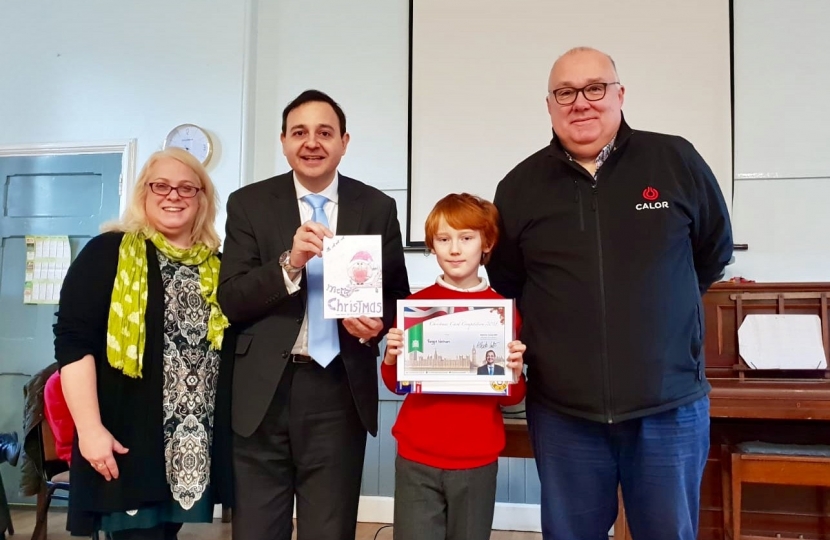 Alberto launched his Christmas Card Competition again earlier this year, inviting primary school pupils in his constituency to design his Christmas card for 2018. A record number of schools entered this year’s competition with Reggie Welham being award first place, winning a special House of Commons prize and certificate for his design featuring a festive Robin on the cover.

The winning entry was chosen by Alberto and Mr Paul Blacklock, Operations Director of Stoney Stanton-based Calor Gas, who sponsored this year’s competition.

First Runner-up in this year’s competition was Lotte Bowes from Gilmorton Chandler C of E Primary School and the Second Runner-up was Neave Haines from Greenfield Primary School – both Runner-up designs are featured on the reverse of the cards.

Alberto said, “It is always such a pleasure to organise my annual Christmas Card Competition, and this year was certainly no exception, and with more South Leicestershire Primary School’s entering than ever before, it was a really difficult decision to choose the winner. The entries this year were of a great standard and so Reggie deserves particular credit for his brilliant Robin design”.

Mrs Jo Blackburn, Head Teacher of Dunton Bassett Primary School, also said, “"We are delighted that the creativity of one of our pupils has been recognised, we are so thrilled and excited that Alberto visited our school to present a prize in person to Reggie”.

Mr Ally Statham, Distribution Manager at Calor Gas Stoney Stanton, added, “Calor is pleased to continue to be involved in the Christmas Card Competition with our local MP, Alberto, and to build their profile within the local community. Being based in Stoney Stanton we also actively take part in assisting local sports teams and other community based groups and projects throughout the year when the correct opportunities arise”.

Alberto concluded, “My sincere thanks again to the excellent Calor Gas for kindly agreeing to sponsor my Card Competition this year, and to all the schools and pupils who took the time to submit their wonderful yuletide designs. I already look forward to next year’s competition and hope to involve even more South Leicestershire schools and pupils than ever before”.