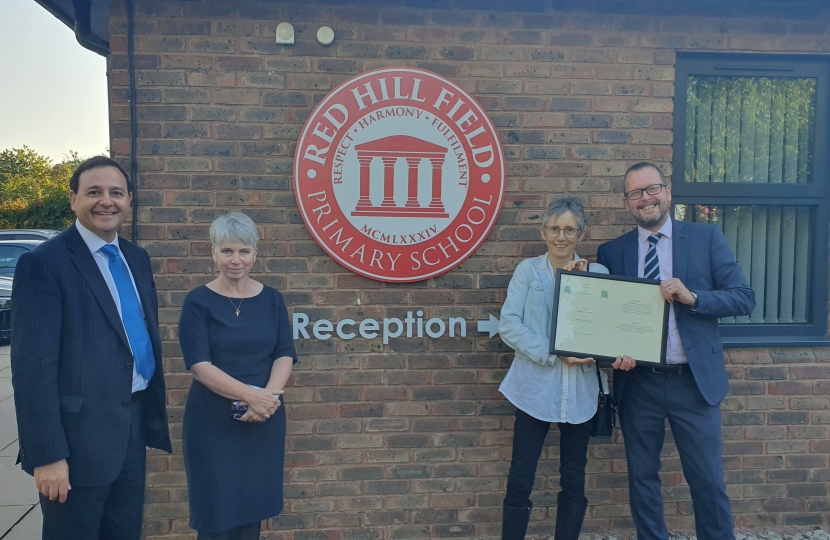 South Leicestershire MP, Alberto Costa, last week visited Red Hill Field School to celebrate their 35th anniversary. The school which caters for children aged 4-11, was marked by Ofsted in their last inspection as good celebrated their 35th anniversary by hosting a party to bring the whole community together.

In his education question asked in the House of Commons last week, Alberto thanked the headteacher, Stephen Snelson, and all the school staff for their hard work over the last 35 years. The Rt Honorable Nick Gibb MP, Minister of State for School Standards, responded by congratulating Mr Snelson for his fantastic work as headteacher and paying tribute to staff for the excellent education they are providing to the pupils.

Alberto was delighted to have been invited by the school to the anniversary celebrations in which activities were held in order bring both the school and local community together. There were games for children, music, food and entertainment.

Alberto said “I am so pleased to have been invited to Red Hill Field School to celebrate their 35th anniversary. It is a fantastic school with wonderful teachers and staff who support and provide excellent education to its pupils. This was a wonderful celebration which brought the whole community together to celebrate the school.”

Red Hill Field also unveiled their new logo as part of the celebrations. When the school was opened in 1984, construction found a large amount of Roman tiles and pottery and subsequent investigations discovered that the school was built on a Roman settlement. The new logo includes a Roman Villa to honour the rich and cultural history that the school was originally built upon.

Mr Snelson, Headteacher at Red Hill Field added; "We’re delighted to welcome our MP, Alberto Costa, at this exciting time, as we celebrate the thirty fifth anniversary of our School. Our continued success is a measure of everyone's effort in the school community - children, parents and staff – who work in harmony and with respect to ensure that we achieve excellence and fulfilment everyday. The Roman remains found right here on the school site are a fantastic learning resource, bringing history to life for our children."