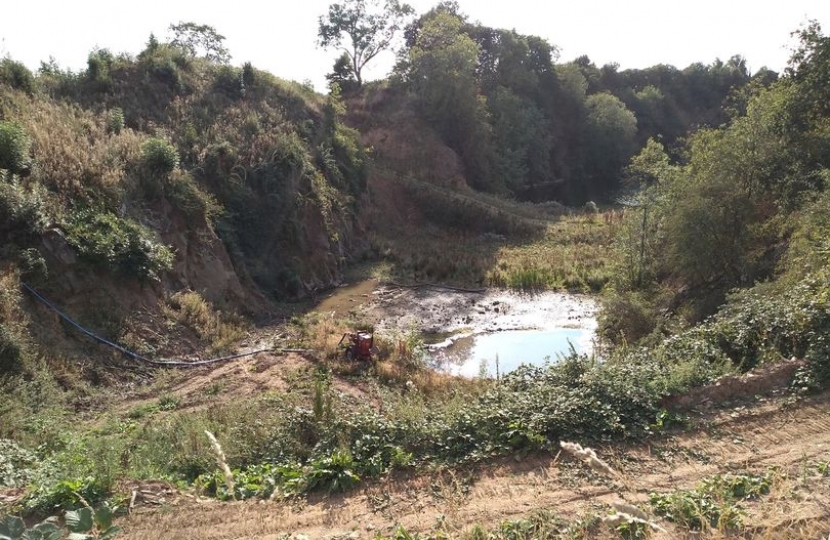 MP for South Leicestershire, Alberto Costa, has called on the Environment Agency to take action over the alleged activities taking place at two former quarry sites in Sapcote.

The MP’s call follows a meeting he organised last week with the village’s County Councillor, Maggie Wright, representatives from the Environment Agency East Midlands and Parliamentary Under Secretary of State at the Department for the Environment, Food and Rural Affairs (DEFRA), Rebecca Pow MP.

Residents of Sapcote have long held widespread concerns about the alleged draining of water and alleged unauthorised dumping of materials at Granitethorpe and Sapcote quarries in the village.

The landowner of the sites has previously been the subject of enforcement notices after a hedgerow was illegally removed and Leicestershire County Council also threatened legal action over unauthorised dumping in 2016.

Alberto spoke of his and his constituent’s ‘frustrations’ at the lack of substantive action taken by the Environment Agency who have been investigating local concerns at the two former quarry sites since 2016.

Alberto added, “Both Rebecca (DEFRA Minister) and I were quite clear with the Environment Agency that we need to see their investigations resolving soon and with firm but fair outcomes for local residents who have been deeply concerned by the alleged activities in Sapcote for some time. The village’s County Councillor, Maggie, has been working incredibly hard on behalf of the people of the village to ensure that their voices are heard, and there must be a suitable conclusion for all concerned here. I have set the Environment Agency a deadline by which to inform Maggie and I of the actions they will be taking, and if not, I will not hesitate to again raise this matter in the House of Commons and formally ask the Minister to intervene”.