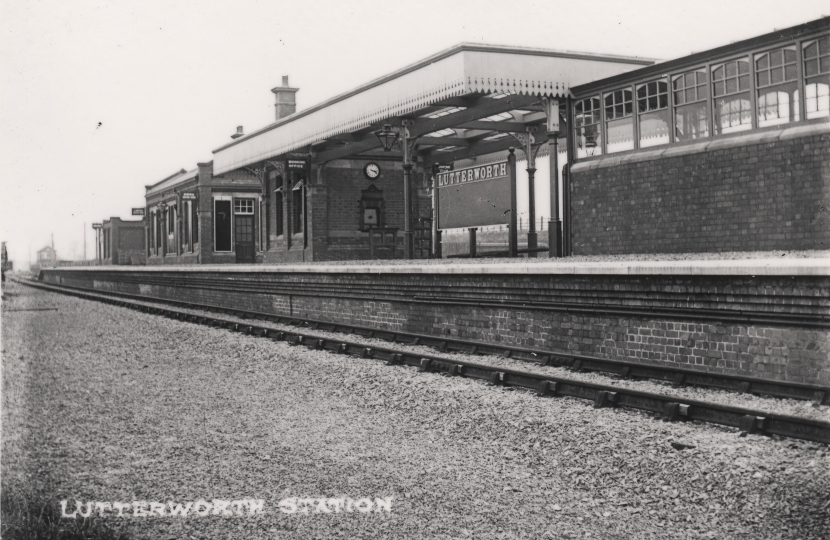 MP for South Leicestershire, Alberto Costa, has given his backing to ‘exciting’ plans from local campaigners to reopen the Rugby to Leicester railway line which was previously closed under the Beeching cuts in the 1960s.

The ‘Lutterworth Line’ proposals put forward by Sustainable Transport Northamptonshire would seek to reconnect the old railway line between Rugby and Leicester, and would include two new passenger stations at Lutterworth and Cosby – the route would also operate services between Northampton and Nottingham with a plan to link up the Magna Park logistics hub near Lutterworth.

The project would see the railway line following its original position on the Great Central railway adjacent to the M1 motorway before linking up with the Birmingham to Leicester line near the existing Narborough station.

The plans have been put forward by campaigners to the Government’s ‘Restore Your Railway Fund’, which seeks to restore lost rail connections. The proposals have been submitted to the first stage of the fund which would allocate further resources under an ‘Ideas Fund’ to explore the feasibility of the route – the idea was formally submitted in the latest round of applications which closed last Friday (5th March), both Mr Costa and Mark Pawsey, MP for Rugby, wrote letters of support for the project.

Alberto said, “These are hugely exciting plans to restore the historical Lutterworth Line between Leicester and Rugby and I am really delighted to be supporting them. The proposals put forward by Sustainable Transport Northamptonshire would revolutionise the regional transport system we have in South Leicestershire and would meet one of the Government’s core objectives in moving HGV haulage to the much more sustainable rail freight network.

The Lutterworth Line would bring huge economic and social benefits by linking Rugby, Northampton and Leicester together, and with a good sized station in Lutterworth and a village station for Cosby, this would allow my constituents to more easily travel around parts of the country. Also, this project would undoubtedly bring a significant amount of positive commerce into this part of the county”.

Harry Burr of Sustainable Transport Northamptonshire added, “As a new organisation created by the younger generation that will experience the biggest effects of climate change, Sustainable Transport Northamptonshire is very pleased to be leading on the Lutterworth Line application project to the Restoring Your Railway Fund. We'd like to connect as many people as possible in the most environmentally sustainable way we can, which is why we are supporting this project. It connects a town of 10,000, Lutterworth, without an existing rail link, back to the rail network, while connecting 3 large communities together; Northampton, Rugby, and Leicester."

Stephanie Clifford, Chair of the Rugby Rail Users Group, added, “It's just over fifty years since the direct rail link between Leicester and Rugby was closed. During that time, demand for passenger travel and freight has grown spectacularly, and Rugby Rail Users Group (RRUG) is pleased to support the Restoring Your Railway proposal to re-establish this connection. The proposed route seems ingenious, useful and realistic.

It restores a railway station to Lutterworth and provides a route for Rugby passengers not only to Leicester, but to Nottingham and beyond. The new settlements at Houlton and Lutterworth East will also be well-served by the link, adding to the journey possibilities. The proposed freight capacity will take pressure off local roads such as the busy A5 and relieve the congested West Coast Main Line between London and Rugby. In addition, the environmental credentials of the proposal are strong, as it effectively rides along next to the hard shoulder of the M1, minimising any impact”.

Pictured above is the old Lutterworth Station prior to its closure in 1969. (Credit: Leicestershire, Leicester & Rutland Record Office)