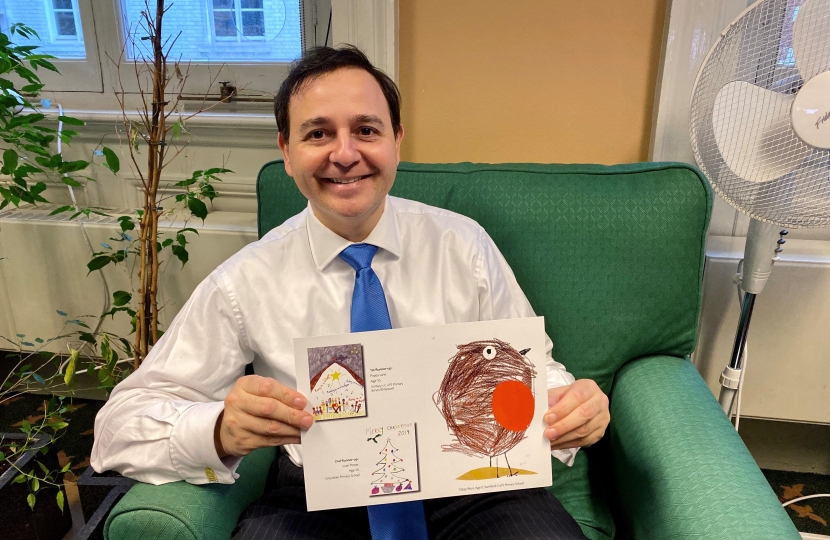 Alberto launched his Christmas Card Competition again earlier this year, inviting primary school pupils in his constituency to design his Christmas card for 2019. A record number of schools entered this year’s competition with Daisy Wurr being award first place, winning a special House of Commons prize and certificate for his design featuring a festive Robin on the cover.

The winning entry was chosen by Alberto and Mr Andy Parker, Head of Strategy & Corporate Affairs at Stoney Stanton-based Calor Gas, who sponsored this year’s competition.

First Runner-up in this year’s competition was Poppy Lane from St Mary’s Bitteswell Primary School and the Second Runner-up Luan Power from Greystoke Primary School in Narborough – both Runner-up designs are featured on the reverse of the cards.

Alberto said, “My annual Christmas Card Competition is always a highlight of the year, and I’m really delighted that more Primary Schools than ever before from South Leicestershire have taken part again this year. All of the entries this year were particularly brilliant, which made judging the competition so difficult, but Daisy’s fantastic design of a lovely Christmas Robin was a very worthy winner”.

Alberto added, “Huge thanks to South Leicestershire’s own excellent Calor Gas for kindly agreeing to sponsor my Card Competition again this year, and to all the schools and pupils who took the time to take part in the competition. I’m already really looking forward to next year’s competition and hope to see even more pupils from across the constituency taking part”.