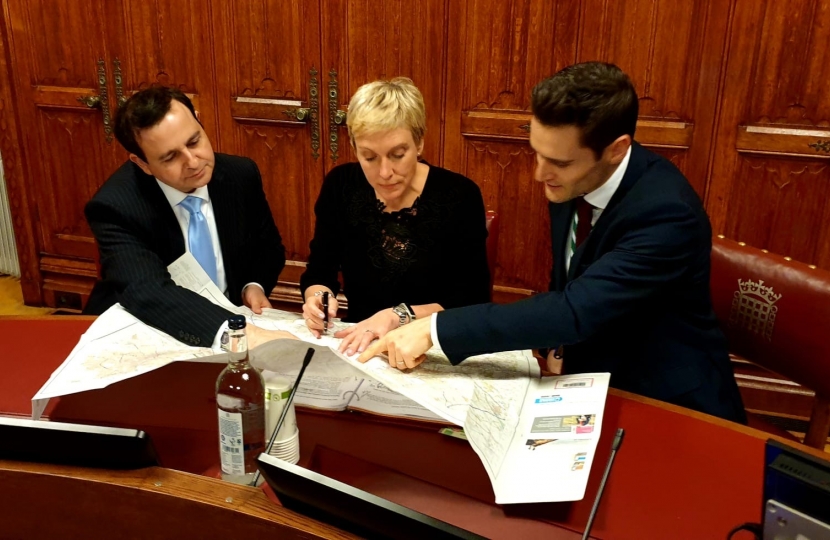 The major trunk road, which borders both the South Leicestershire and Bosworth constituencies, has been the site of a recent spate of collisions, including a number of fatalities, most notably at the High Cross and Smockington Hollow junctions.

Alberto also recently met with the Divisional Director of Highways England, Catherine Brookes, to hear about the authority’s planned £3 million improvement measures for the South Leicestershire stretch of the A5 which are due to begin in March later this year.

Alberto said, “This was a very productive and useful meeting with the Roads Minister and my new constituency neighbour Luke to directly pass on the very serious concerns many of my constituents have about the A5. Similar to my meeting with Highways England last week, I was encouraged to hear about the planned safety works on the carriageway such as vastly improved and additional signage, clearer road markings and the installation of new high friction surfacing”.

“Highways England are investing a very welcome £3 million in road improvements and safety measures on this stretch of the A5 and I am really hopeful that these new works will have the desired effect in reducing the number of collisions previously seen. I am also very grateful to Dr Luke for joining up with me on this to ensure that both our constituents, and of course all road users, can use this part of the A5 safely and with some peace of mind. We will both continue to monitor this very closely, but I do very much look forward to seeing the improvement works beginning in earnest in just a few months’ time”.

Dr Evans, MP for Bosworth said “Having a safe A5 which is capable of meeting the needs of our growing communities is essential for the wellbeing and prosperity of the entire west of Leicestershire.

“I am pleased that Baroness Vere was able to meet with us to discuss safety improvements along this vital artery. Of course I welcome the planned safety works, which need to be implemented as soon as possible; but this is only one step in our campaign to make sure the A5 is fit for purpose not just for the next decade but for the second half of the twenty first century.”

Picture above shows Alberto and Luke Evans MP meeting the Roads Minister, Baroness Vere, in the House of Lords earlier this week.

Alberto Costa, MP for South Leicestershire, has raised questions in Parliament over the protections in place to protect the planning system from abuse following local residents expressing their concern over a recently passed planning application in Claybrooke Parva.