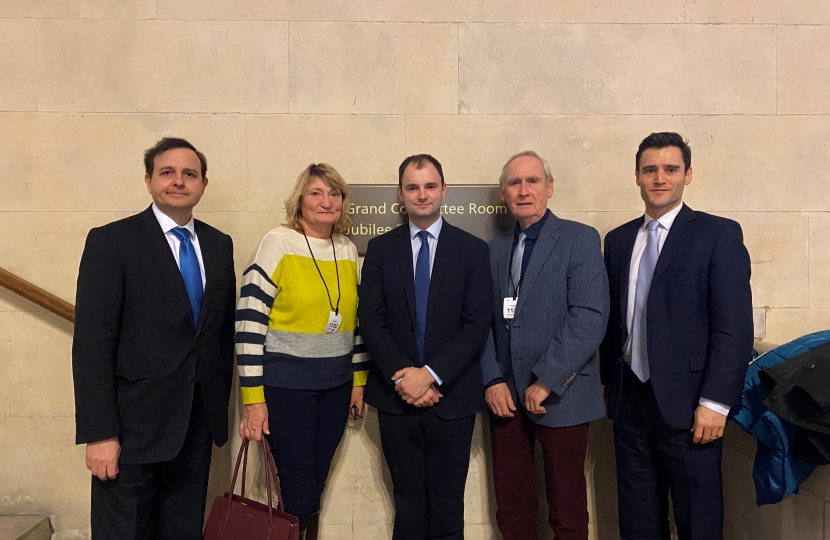 South Leicestershire MP, Alberto Costa and Bosworth MP, Dr Luke Evans, are encouraging their constituents to respond to the formal consultation opened by developers Tritax Symmetry for the Hinckley National Rail Freight Interchange (HNRFI) proposed for the south of the village of Elmesthorpe.

The MPs recently met with the Combined Parish Councils group in Sapcote to discuss the rail freight proposals and the plans to oppose the development.

Previously, Mr Costa has sent a survey to over 11,000 constituents in the Fosse Villages of Elmesthorpe, Stoney Stanton, Sapcote, Sharnford, Croft, Huncote, Aston Flamville, Potters Marson and Wigston Parva to ask for their views on the proposed Hinckley National Rail Freight Interchange and led a debate in Parliament on the plans in February 2020 which was supported by Dr Luke Evans MP.

The Bosworth MP has launched his own survey for local residents in his constituency to have their say, with 13,000 households to be contacted over the next four weeks. Dr Luke is also running an online survey, which can be completed on his website.

Both MPs have also recently voiced their support for the comments made by Leicestershire County Council who had raised significant concerns about the extent of the consultation, the traffic modelling used for the plans and the lack of an appropriate bypass for nearby Stoney Stanton and Sapcote.

The eight-week consultation opened today (12th January) and will close on Wednesday 9th March, comments should be made to https://www.hinckleynrfi.co.uk/

Alberto said, “I am encouraging my constituents in the vicinity of the proposed Hinckley National Rail Freight Interchange to please respond to the developer’s formal consultation at the earliest opportunity to make their feelings known about this huge development. The rail hub would have a massive impact on the local area in terms of the increases in traffic movements and the pressures on local infrastructure, and not forgetting the detrimental environmental impact so it’s so important that residents use this time to have their voices heard”.

Dr Luke added, “The proposals for the National Rail Freight Interchange have the potential to have a serious and adverse effect on much-loved beauty spot Burbage Common in my patch, so I’m pleased to be working with Alberto on this. Residents near the Common and wider in Hinckley and Burbage have raised concerns about heavy traffic, wildlife and the environment, and our infrastructure not being able to cope if the Interchange were to be built.”

“I would strongly encourage people to help support Alberto and I by having their say and completing the public consultation, to formally share their views with the developer, the Planning Inspectorate and the Council. This is an absolutely vital stage in the process, and it’s important as many local people as possible get the chance to have their say.”

Alberto concluded, “It goes without saying that I absolutely share my constituent’s concern in relation to the Rail Freight Interchange. Residents will know that I have been consistent in opposing these plans since they were first announced, and I very much hope to again raise this matter in a Parliamentary debate in the coming weeks. There are questions that must be answered over the placement of this rail hub, especially with a number of similar sites located nearby, and I look forward to raising this in Parliament once again to ensure that the views and concerns of my constituents are listened to at the very highest levels of Government”.

South Leicestershire MP, Alberto Costa, is encouraging local residents to get involved in finding a name for the new Glen Parva prison – with the facility due to open next year, the Ministry of Justice are asking the community to send in their suggestions that ‘embrace the history and culture of the area’.